by Patty Rasmussen Jul 6, 2020
This pair of buttons attached to a piece of textile is believed to have belonged to Gen. Robert E. Lee. North Carolina Department of Natural and Cultural Resources

A pair of buttons from the dress coat of Gen. Robert E. Lee and even a strand from the tail of his horse, Traveller, were among the items found in a mangled metal box discovered beneath the cornerstone of the 75-foot (22.8-meter) Confederate Monument on Union Square in Raleigh, North Carolina.

The time capsule was placed beneath the monument when it was built 126 years ago in 1894. Unfortunately, the box has seen better days. It was crushed on one side and rusted through in some places allowing the elements in. Archaeologists and conservators from the North Carolina Department of Natural and Cultural Resources opened the time capsule July 2, 2020, and are examining and cataloging its contents. They'll attempt to preserve what they can of both the box and the items inside.

So far, the recovered items include a smaller wooden box, a stone thought to be from Gettysburg, two buttons attached to a piece of cloth, and a strand of what appears to be horsehair. A newspaper clipping from the May 25, 1894, issue of The Charlotte Democrat offers a glimpse of some of the other items in the time capsule including: a roster of North Carolina troops in the war; an account of the Charge at Gettysburg by S. A. Ashe; Confederate currency; a map of Wake County, North Carolina; and even (allegedly) a lock of Lee's hair. Most are likely lost to time and the elements, though.

The Confederate Monument was one of many on state property taken down in the wake of protests following the death of George Floyd, a 46-year-old black man killed in Minneapolis in May 2020. Floyd was held down with a police officer's knee on his neck for more than eight minutes. His death sparked worldwide anti-racism protests.

In response to protesters climbing on and attempting to pull down statues on public property, North Carolina Gov. Roy Cooper ordered they be removed.

"I have ordered Confederate monuments on the Capitol grounds be moved to protect public safety," Cooper said in a statement and tweet June 20, 2020. "Monuments to white supremacy don't belong in places of allegiance, and it's past time that these painful memorials be moved in a safe, legal way."

The metal box the time capsule was placed in was crushed on one side and rusted through in some places allowing the elements in.
North Carolina Department of Natural and Cultural Resources
Now That's Interesting
Another time capsule — this one buried at the cornerstone of the amphitheater of Arlington National Cemetery — was opened April 9, 2020. The capsule was buried Oct. 13, 1915, by then-President Woodrow Wilson and was filled with items including copies of the Declaration of Independence and U.S. Constitution, an American flag, coins, stamps, a map of Pierre Charles L'Enfant's design for Washington, D.C., a copy of The Washington Post and a Bible.

Vote By Mail: What You Need to Know for the 2020 Presidential Election 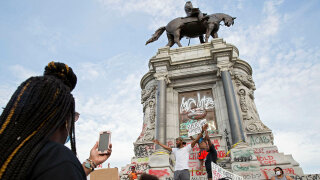 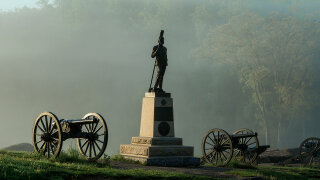 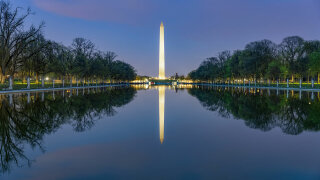 8 Crazy Facts About the Washington Monument