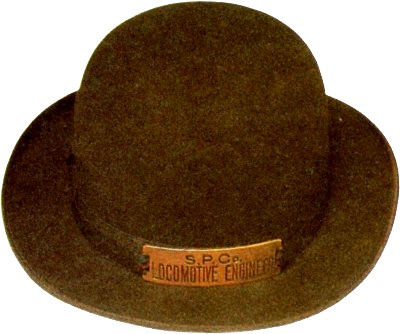 Although the traditional striped cap has become synonymous with railroad engineers, other styles of headgear were not uncommon. This version, bearing a Southern Pacific hat plate, has been dated to sometime before 1920.
Hans Halberstadt

Nowhere was the railroad more evident than in the newsworthy events and popular culture of the day, which often featured colorful tales of railroading and railroaders. Take the story of Casey Jones, for instance. Although apparently due to Casey's own misjudgment, the famous wreck of his passenger train in 1900 at Vaughan, Mississippi -- in which he perished -- resulted in the deaths of no passengers. By sticking with his locomotive until it was too late to save himself, engineer Casey was able to slow the train appreciably, minimizing the collision's effects. The resultant publicity painted Casey as a hero; here was the story of a "brave engineer" who gave his life to save those of his passengers. The tale -- and the popular song that soon followed -- remain a permanent part of American folklore and history today.

With the rise of motion pictures and movie theaters, railroads and railroaders would enjoy a lengthy stay in the cinematic limelight. The success of the 1903 film The Great Train Robbery -- a simple, fast-paced "shoot-'em-up" Western -- guaranteed that more train-related movies would follow.

In 1905, a record-breaking dash by train, from Los Angeles to Chicago via the Santa Fe, was another railroading event that captured the nation's attention. The instigator, Walter Scott -- popularly known as "Death Valley Scotty" and widely remembered for his colorful claims about his mining exploits -- apparently hired the train purely for publicity's sake.

Periodicals, literature, and even the Post Office featured railroads in ways that could not escape public notice. Following its celebrated dash in 1893 at a top speed of 112.5 miles per hour. New York Central's famous locomotive, No. 999, had its likeness reproduced on a two-cent postage stamp. From accounts of cross-country rail travel in Harper's Weekly to Frank Norris's emotional, less-than-flattering fictional account of the struggle between farmers and the railroads in "The Octopus," the nation's train system was constantly being observed and scrutinized.