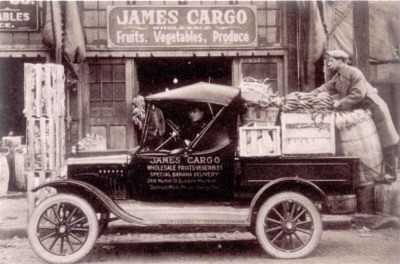 The introduction by Ford of its first light-duty pickup truck as an optional body for the 1925 Model T Runabout proved a bellwether for the automotive industry. Suddenly, less-than-carload traffic could be carried far less expensively by road than by rail.
Collection of Publications Internatonal, Ltd.

This governmental involvement reflected a shift in public attitudes toward transportation. Prior to the rise of the automobile, it was taken for granted that public transportation would be provided by private companies, and most specifically by the railroads. This was an obligation assumed by the railroads in their capacity as a "natural monopoly." Railroads could develop and expand as economic need dictated, and investors would assume the risks and the benefits. The role of government was to ensure that the public's interests were served, and the railroads were expected to accept this regulation in exchange for business opportunities.

Railroads had long been viewed -- with varying degrees of accuracy -- as being abusive in the exercise of their power and gradually came under oppressive regulation by state and federal authorities. Grangers, Progressives, and any number of other "reformers" took advantage of the railroad industry as a convenient political target.

In the age of the automobile and the airplane, railroads strove mightily to convey the sense that they, too, were "Ahead of the Times."
Sanderson Photography, Inc.

The automobile arrived as a practical consumer item at the same moment the nation and its political leadership were looking for an alternative to the railroad. The Good Roads movement channeled government monies into highway construction on a larger scale than ever before. More roads led to a larger market for cars, which increased political pressure to build even more and better roads, and so it went until a new public works philosophy became established.

The job of the government shifted from regulation to the actual provision of services-specifically, the building and maintenance of roads. Indeed, the social philosophy of transportation itself moved from public transportation being something available to anyone who could afford it to that of a personal right that should be provided to all by the government.

The Great Depression created an environment in which additional types of transportation began to receive permanent government support. Airlines, barge operators, and even pipelines were subsidized by federal investments, leaving the railroads in the unique and unenviable position of being subjected to greater regulation than any competing transportation mode, but without any resulting benefits. This, in essence, is "the railroad problem" that began to take form during the late 19th century and remains with us even today.