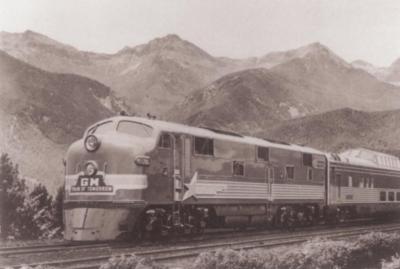 In September of 1945, Burlington ordered an identical pair of trains from Budd (its exclusive supplier in the lightweight era) that two years later would enter service between Chicago and the Twin Cities as the Twin Zephyrs. These trains were notable in that each contained four Vista-Dome cars for sightseeing-undoubtedly the most exciting innovation in postwar passenger railroading. In July of 1945, just months before the Twin Zephyrs order, Burlington had introduced its Silver Dome, the prototype Vista-Dome, converted in the railroad's Aurora (Illinois) Shops from a Budd coach.

The dome-car brainstorm had come a year earlier to Cyrus R. Os-born, a General Motors vice president and general manager of its Electro-Motive Division, builder of diesel locomotives. The inspiration occurred while he was riding in the cab of one of his company's products through Colorado's Glenwood Canyon. It struck Osborn that passengers would gladly "pay $500 for the fireman's seat" with the views it afforded. Osborn sketched the dome idea and General Motors eventually built it, in the four-car, all-dome prototype Train of Tomorrow, which debuted in 1947.

This little demonstration train consisted of a round-end observation-lounge, sleeper, diner, and chair car, all topped with glass-enclosed observatories. Each of these types would be replicated for some of the 16 railroads (virtually all of them in the West, since clearances on most eastern lines prohibited dome operation) that would come to own a grand total of 236 dome cars by the time the last one was built in 1958.

Probably the greatest dome train of all was the Chicago-San Francisco California Zephyr, operated by Burlington in partnership with the Denver & Rio Grande Western and Western Pacific. This handsome Budd-built train was ordered in 1945, just a month after the Twin Zephyr, but didn't enter service until 1949, so extensive (67 cars, for six trainsets), complex, and elegant was the equipment ordered. With five domes and a schedule designed to transit both the Colorado Rockies and California's Feather River Canyon in daylight, the CZ, as it was known to its intimates, made good its publicists' claims by becoming the "most talked about train in America."