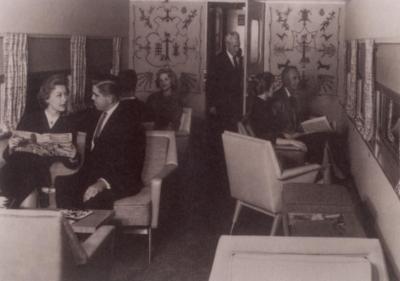 Perhaps the most bizarre episode in the postwar passenger boom involved the Chesapeake & Ohio Railroad and its impetuous chairman, Robert R. Young. Though the route of the coal-hauling C&O was relatively short on population areas and thus passenger potential, in the mid-1940s Young ordered a total of 351 cars to modernize its passenger service. This included 46 cars from Budd to inaugurate the Chessie, an all-new daytime streamliner to run between Washington and Cincinnati (with connecting sections to Newport News, Virginia, and Louisville, Kentucky). The equipment for this luxurious train, which had two dome cars and a lounge car featuring a fish tank, was delivered in August of 1948.

By then, however, a downturn in business conditions and disappointing ridership on both C&O and competitor Baltimore & Ohio caused the Chessie to be rethought-and abandoned before it was even inaugurated. All but four of the 46 Chessie cars were sold off, and by 1951 only 130 cars from among Young's 351-car order remained in C&O service, many having been diverted before they were ever delivered. (Southern Pacific and Rock Island had been responsible for a similarly stillborn train, the Golden Rocket, on the Golden State Route between Chicago and Los Angeles. This tri-weekly luxury service was set to debut in 1947, but the operators pulled the plug, setting a sad precedent for the Chessie.)

C&O's controversial Young was not shy about publicity. One occasion that garnered plenty of it was a 1956 magazine ad he instigated with a banner headline that screamed, "A Hog Can Cross America Without Changing Trains-But YOU Can't!" A pig lolled contentedly in the door of a stock car, while a distraught family-labeled "John Q. Traveler"-watched the train roll by.

Indeed, the United States had never had a true transcontinental, coast-to-coast train (and wouldn't until 1993, when Amtrak extended its Los Angeles-New Orleans Sunset Limited to Jacksonville and Miami). In the ad, Young prodded the industry, saying that C&O "stands ready" to join with other carriers in providing such service.