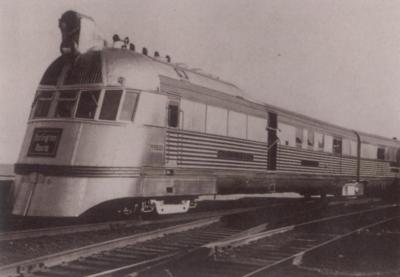 In 1948 and again in 1949, the Chicago Railroad Fair provided an admirable showcase for innovations in passenger service and other aspects of railroading. Dieselization and streamlining, two parts of the equation that equaled modernization, went hand in hand, and diesels were much in evidence in the Railroad Fair's equipment displays. Fairbanks-Morse was represented by a 1,500-horsepower road switcher and a streamlined passenger unit powering Milwaukee Road's Hiawatha. The Electro-Motive Division (EMD) of General Motors brought its Train of Tomorrow with its sleek E7 diesel, along with an A-B-B-A set of streamlined F3 freight diesels.

These F3s were an improved version of the FT that the division had introduced in 1939 and sent barnstorming--84,000 miles over 20 railroads-with the mission of making diesel believers of hardened steam-seasoned skeptics. The demonstrator FTs were remarkably successful, considering the daunting nature of their task, and 1,172 FTs (and similarly powered though somewhat improved F2s) were produced before, during, and immediately after the war.

While steam locomotives were endlessly individualized-from task to task and from railroad to railroad-EMD's salesmen staked their reputation on the utility of a standard product: one size fits all. This allowed locomotive-builders to adopt the production-line approach long since perfected by the automobile companies.

Basically, diesels of the "first generation"-those that performed the herculean and not uniformly appreciated task of vanquishing the steam locomotive-fell into three categories: yard switchers, road switchers, and "cab units," the streamlined locomotives that were originally the norm on the main lines. Yard switching was the diesel's first-calling, one that, by the 1940s, was widely accepted. Sleek diesels hauling passenger trains also became an accepted, if somewhat rare, phenomenon in the late 1930s.

But it was the line-haul application to freight pioneered by the FTs that would shake the industry during and after the war.