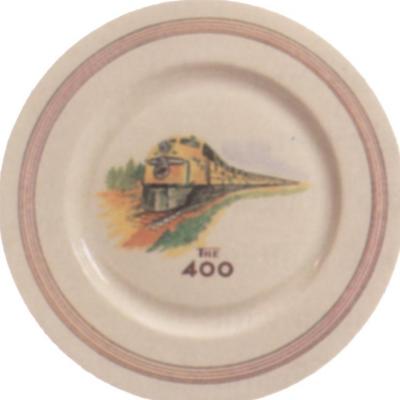 Dining car china was another medium through which to advertise.
Sanderson Photography, Inc.

Steam didn't go down without a fight, however. It was tried and true motive power, not without its virtues, and certainly not without its supporters-given that the business of railroading has typically been filled with hidebound traditionalists. Steam locomotive production had continued apace through the war, and a number of lines continued to order (and in a few cases, build) steam for a few years afterward. This final incarnation of steam took a relative high-tech form, exemplified by Lima's "Super-Power" locomotives and by comparable products from Baldwin and Alco. They featured higher boiler pressure, feedwater heaters (heating water on the way to the boiler), roller bearings on engine and tender, mechanical and pressure lubricating, one-piece cast-steel bed frames, superheaters (heating steam passing to the cylinders), and often boosters on trailing trucks to provide a little added power for starting heavy trains.

Coal-hauler Chesapeake & Ohio was an unusually good steam customer, purchasing a number of locomotives after the war (but all to previously established designs). Lima delivered 20 and Alco 30 of the 2-8-4s (called "Kanawhas," not "Berkshires," on C&O), and Lima delivered five 4-8-4s ("Greenbriers," since C&O was too Southern to roster a "Northern"). Lima supplied 2-6-6-6 "Alleghenies" and Baldwin, its 2-6-6-2s-the last of which, No. 1309, arrived in September 1949, concluding Baldwin's long history as a builder of steam for domestic use. Number 779, the last of 10 Berkshire's that Lima delivered to Nickel Plate in 1949, wrote finis for that builder. Alco's last steamer was also a Berkshire, for Pittsburgh & Lake Erie. (The 27 4-8-4 "Niagaras" that Alco had built for New York Central from 1945-46 represented one of the last successful American steam-locomotive designs.)

Only a few railroads had the size, expertise, and facilities to build their own locomotives in the modern era: CB&Q at West Burlington, Illinois Central at Paducah, Great Northern at Hillyard, Frisco at Pine Bluff, and Canadian Pacific at Montreal. Reading built 30 T1 Northerns from 1945-47, and 10 G3 Pacifics-both notable in being new designs that were fielded late. But in homemade steam, Pennsylvania and Norfolk & Western were preeminent by far. Pennsy's Juniata Shops in Altoona turned out nearly 7,000 locomotives in a wide variety of classes-ending, in 1946, with 25 streamlined, shark-nosed T1 4-4-4-4 duplexes for passenger service (Baldwin built another 25) and 25 Q2 4-4-6-4s. Neither class was wholly successful.

But when it came to steam in the twilight years, the Norfolk & Western-a coal road, like C&O, that invested in burning what it hauled-stood alone. N&W's Roanoke Shops was the birthplace for some of the most advanced and powerful locomotives ever built: Y6 2-8-8-2s for coal drags and general merchandise, Class A 2-6-6-4s for fast freight (and just about anything else), J 4-8-4s for passengers, and S1 0-8-0s for switching. These were major players in steam's final chapter.

The sleek, powerful Js were unusual in being designed as streamlined locomotives (though some built in wartime ran temporarily without shrouds, to save metal); the last trio among the 14 that were built rolled out of Roanoke Shops in 1950, the same year Class A construction ended-and even then, N&W wasn't finished. Y6s were assembled into 1952. The honor of being the last steam locomotive ever built in America fell to an S1 switcher the following year.