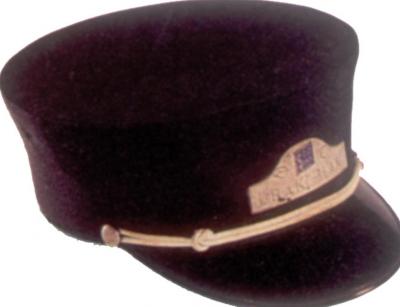 The man who wore this hat could be mistaken for no one but a railroad conductor. He was the ranking figure of authority aboard his train.
Sanderson Photography, Inc.

If railroading before World War I still had a hint of the nineteenth century about it, railroading by the mid-1920s was distinctly modern. Locomotive and car designs based on the United States Railway Administration standards of 1918 would define railroading through the 1960s. Despite the fact that total rail mileage dropped slightly throughout the decade (largely through the abandonment of marginal or duplicate lines), railroads invested heavily in property and equipment.

Even today, the period is widely considered to be the zenith of "classic" railroading. In 1920, the U.S. railroad network was still near its peak, with 253,000 miles of track operated by more than one-and-a-half million railroad men and women employed by at least 1,000 railroad companies.

Although somewhat erratic, the U.S. economy was vigorous, and railroads found it relatively easy to raise money on Wall Street for big projects. There were no great new lines to be built-the Milwaukee Road's 1916 Puget Sound extension, from the upper Midwest to Seattle, was the last major addition to the national system-but there was a great deal of "addition and betterment" work to be accomplished.

In Washington's Cascade Range, the Great Northern opened the Cascade Tunnel in 1929. To increase capacity and help reduce the hazard of asphyxiation, GN (like the Milwaukee Road) electrified portions of its mountainous lines. Elsewhere across the country, companies built cut-offs and generally "spent money to make money."

The steam locomotive had been around for more than a century, and its basic operating principles -- involving thermodynamics, the factor of adhesion, and fuel efficiency -- were well understood. But a new generation of designers, armed with new theoretical tools and increasingly sophisticated technology, sought to boost the power and efficiency of the steam locomotive. One result was what Lima Locomotive Works called "Super Power."

By increasing the size of the firebox well beyond what had previously been thought adequate for a given boiler size, Lima achieved a large locomotive capable of both high horsepower and high speed. Bigger wheel arrangements (4-6-4, 4-8-4, 2-10-4) and a variety of efficiency-boosting appliances (feed-water heaters, new firebox designs, and valve-gear improvements), helped define the basic principles of "Super Power." The famous Hudson 4-6-4 locomotives, built by the New York Central starting in 1927, exemplify the "big steam" of the 1920s.

Some improvements were less dramatic but equally important. Before the war, signal systems tended to rely on semaphores and mechanical interlockings-complex devices that prevented a signal from being displayed if the switches were not lined up properly. Partly because of the wartime leap in technology, railroads and signal companies were able to perfect new circuits and hardware to vastly increase the safety and capacity of existing lines. The introduction of reliable, high-visibility signal lights allowed railroads to begin the replacement of the high-maintenance mechanical semaphores. Another leap in safety came in 1922, when Congress legislated that all railroads with high-speed passenger trains (above 80 miles per hour) introduce an "Automatic Train Control" system designed to safely stop trains should the engineer miss a signal. That nearly 50 railroads were affected suggests the level of intensity at which the rail network was working.