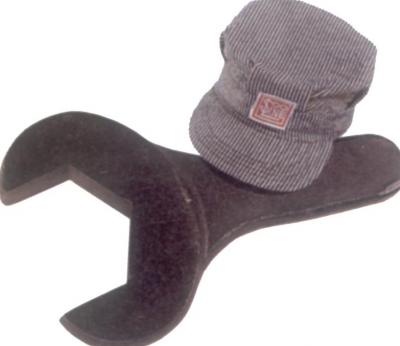 A traditional railroad hat shows the size of this ordinary railroad shop tool. Trains were big, and sometimes it took a sturdy wrench, a long pipe, and a strong man to work on them.
Sanderson Photography, Inc.

For most employees, this was a good time to be "on the railroad." Some, like trackmen and carmen, still worked outside in all kinds of weather at physically demanding jobs. But brakemen no longer had to ride the tops of cars, and the 1917 Adamson Act had made the eight-hour day standard for railroad workers. The near-universal use of air brakes, automatic couplers, and safety appliances made the workplace vastly safer, while fundamental changes in the law made companies more aware of their liability for injuries.

The war had yet another long-lasting effect. Some of the temporary workers hired or promoted during the labor shortage managed to hold on to their jobs afterward, paving the way for increased participation in the railroad labor force by women, blacks, and other previously underrepresented minorities. Some railroads, like the B&O, showed remarkably enlightened labor policies; the railroad's Cooperative Plan of 1923 was quite similar to the "quality circles" and "total quality management" that many companies practice today: For the most part, railroad men and women enjoyed good wages, decent working conditions, and the respect of their neighbors. They were proud to be part of such a vast and well-functioning enterprise.