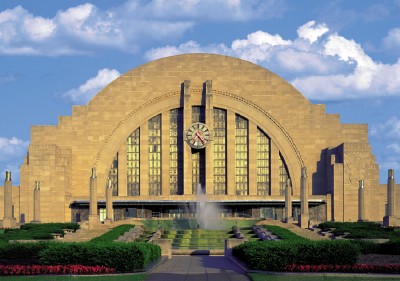 Beginning in 1933, one of the most memorable aspects of a departure by passenger train from Cincinnati was this view of the triumphal art deco facade of the city's Union Terminal.
Greater Cincinnati Convention & Visitors Bureau

The Cincinnati Union Terminal opened on March 31, 1933, during the Depression. Located a mile and a half from the central city, the project made extravagant use of open space and featured an illuminated cascading fountain, plantings, an entry esplanade, and a semi-circular driveway.

Most striking was the main concourse, featuring a 116-foot-high semicircular dome clad in Indiana limestone. Projecting over the 16 through-tracks behind the concourse was the awesome, 410-foot red-marble waiting room, capable of handling the passengers of as many as 200 trains a day.

That day, of course, never came. Service dropped during the Depression, and fewer than 100 trains marked daily comings and goings during the postwar era. The arrival of Amtrak in 1971 meant only one train each way served the depot. Amtrak soon moved to less costly facilities.

The once-grand terminal became a shopping center, later losing its imposing concourse to the expansion of the Southern Railway's adjacent yards. Forlorn and empty, it attracted the attention of civic leaders, becoming the focus of a $68 million project that transformed it into a museum center.

The terminal reopened in 1990 as home to Cincinnati's Museum of Natural History & Science, History Museum, Historical Society Library, and an Omnimax theater. In 1991, it became a stop for Amtrak's Chicago-Washington-New York Cardinal.