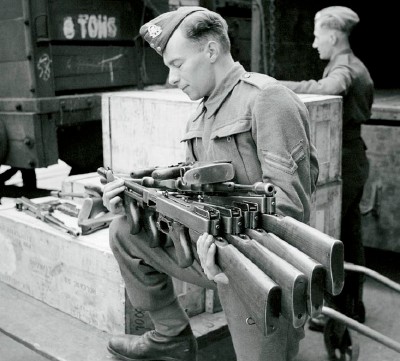 May 1941 saw the spectacular naval battle between the British and the Germans, ending in the sinking of the British cruiser Hood. This battle and other World War II events are detailed in the World War II timeline below.

May 15: Sigmund Rascher, a doctor, Luftwaffe captain, and associate of Heinrich Himmler, requests permission to use Dachau prisoners as test subjects for his medical experiments. He will become known especially for his hypothermia experiments, which will take 300 lives.

President Franklin Roosevelt places 11 French ships in U.S. ports under U.S. jurisdiction due to Vichy France's compliance with the Nazis.

May 19: In gratitude, and as an incentive to continue its cooperation and collaboration, Nazi Germany releases 100,000 French prisoners and reduces the reparations payments it has demanded from the Vichy government.

May 20: In a spectacular but costly air assault on Crete, Germans drop nearly 23,000 paratroopers and glider soldiers onto its northwest coast. While succeeding in taking the island, the German death toll will be unacceptably high.

The Nazi central office of immigration forbids any future emigration of French Jews.

May 22: Fearing that Nazi Germany will attempt to seize the strategically critical Azores, President Roosevelt calls for U.S. military occupation of these Atlantic islands.

May 24: The British battleship Prince of Wales and the cruiser Hood encounter the German battleship Bismarck and cruiser Prinz Eugen in the Denmark Strait. A ferocious, 20-minute gun battle ensues, ending with the sinking of the Hood and the deaths of 1,416 crewmen.

May 27: President Roosevelt, noting that the struggle in Europe has become a "war for world domination," suggests that any German occupation of either the Cape Verde Islands or the Azores would threaten U.S. security and draw a commensurate response.

U.S. sells arms to the British: Large quantities of U.S.-made Thompsons were purchased for the British Army in 1940-41, quickly filling the serious capability gap revealed during the Blitzkrieg of 1940. The Thompson M1 submachine gun -- with a 20-round box magazine and a rate of fire of 700 rounds per minute -- provided a useful short-range assault weapon for many combat and specialist troops. The M1 would be superseded by much lighter and cheaper submachine guns, including the American M3 "Grease Gun" and the British Sten Gun.

U.S. breaks Japan's Purple code: This machine, constructed in 1940 by U.S. cryptanalysts, was used to read "Purple," the Japanese diplomatic code (not, it should be noted, the Japanese naval code). Purple offered millions of cipher combinations. The Japanese considered the system unbreakable, but they made the mistake of phasing it in gradually while still employing the previous "Red" code, which U.S. intelligence had been reading for some time. The overlap helped U.S. cryptanalysts break the Purple code and reproduce the machine, which employed telephone stepping switches rather than the more traditional rotor system. The cryptanalysts were hailed as "magicians," and the intelligence derived from reading Purple was known as "Magic."

Colonel William F. Friedman top U.S. code-breaker: Colonel William F. Friedman was the U.S. War Department's chief cryptanalyst, heading the team that broke the Japanese diplomatic ("Purple") code. Friedman was born in Russia, but his father immigrated to the United States to escape growing anti-Semitism when Friedman was still a child. A graduate of Cornell University, Friedman went to work for a Chicago research laboratory, where he became interested in codes and ciphers. He entered the Army in 1918 and is credited with introducing mathematical and scientific methodology to cryptology. His wife, Elizabeth, was also a gifted code-breaker and is buried next to him at Arlington National Cemetery.

In June 1941 Britain evacuated Crete. Learn about this event and others on the World War II timeline on the next page.