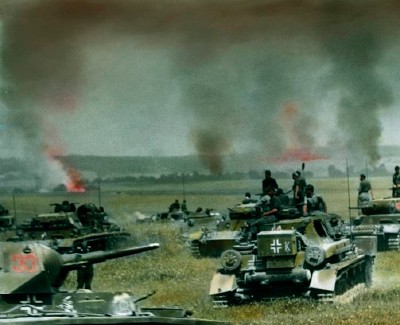 June 1941 found Adolf Hitler plotting to invade the Soviet Union. This and other events of June 1941 are discussed in the World War II timeline below.

May 27: The battleship Bismarck, pride of the Nazi fleet, is sunk by British warships with most of its 2,000-man crew aboard.

May 31: Britain once again assumes control of Iraq following the implosion of its pro-Axis government.

June 1941: A series of attacks by Croatians against their Serbian countrymen in the newly created pro-Axis state of Croatia leaves hundreds dead.

June 2: Perhaps reevaluating his alliance with the inept Benito Mussolini, Adolf Hitler declines to alert Mussolini of his plans to attack Russia when the two Fascist leaders meet at the Brenner Pass.

June 3: Hundreds of Jews are murdered, and their shops looted, in a series of riots in the streets of Baghdad.

June 6: Adolf Hitler issues his "Guidelines for the Conduct of the Troops in Russia." One provision, known as the Kommissarbefehl, calls for the execution of any captured Soviet commissars.

June 11: President Franklin Roosevelt agrees to send U.S. troops to man a British garrison in Iceland. The move will free a British division to be reassigned to a more critical war zone, without exposing U.S. troops to a combat situation.

June 12: In an agreement designed to strengthen the alliance, 14 Allied nations make a pact in which they agree to neither make nor honor separate treaties with any of the Axis nations.

June 14: Soviet foreign minister Vyacheslav Molotov shrugs off intelligence indicating that Germany has Russia in its crosshairs, famously claiming that "only a fool would attack Russia."

Below are more images and highlights from World War II detailing the Nazi German campaign of 1941.

German Wehrmacht overwhelms Red Army in Russia: When Operation Barbarossa began, three separate German army groups -- comprised of tanks, trucks, motorcycle troops, foot soldiers, and several hundred thousand horses -- raced into Russia, attacking in the north, south, and central areas. They surrounded and captured masses of Red Army soldiers. Wehrmacht general Blumentritt described "great clouds of yellow dust kicked up by the Russian columns attempting to retreat and by our infantry hastening in pursuit." However, the general also commented, "The infantry had a hard time keeping up." A march of 25 miles a day was not unusual, and when panzers encountered rough or wooded terrain and superior Russian tanks, they had to stop and wait for the infantry to catch up to help clear the route.

Next is a World War II timeline outlining the major events of June 1940.

"Through the windscreen I could see fifteen German bombers approaching from the west. They were flying low, with provocative insolence, as though our sky belonged to them."