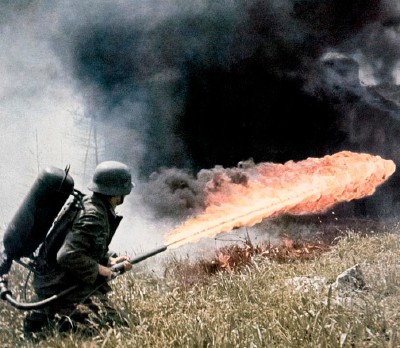 June 1941 saw the launch of Operation Barbarossa -- the Nazi invasion of the Soviet Union -- which was the largest attack in world history. This and other major events are described in the World War II timeline below.

June 15: German high command instructs its warships to destroy submarines belonging to Russia. If caught, the Germans are told to claim to have mistaken the Soviets for Brits.

June 16: Rudolf Hess, still in British custody after his solo parachute trip to Scotland, breaks his leg attempting suicide on a flight of stairs.

The U.S. announces the expulsion of all Italian and German tourist and consular personnel, effective July 10.

June 22: German sentries murder their counterparts at the Russian border at Brest-Litovsk, touching off Operation Barbarossa, the largest army attack in world history. Three million German troops march into Russia along the entire 1,800-mile frontier. Though outnumbered by the Soviets, the Germans have the element of surprise.

June 23: The commander of the Russian bomber group takes his own life when the Soviets come out on the losing end of a wildly unbalanced dogfight, losing 500 planes while downing about 10 Luftwaffe aircraft. By the end of the week, the Soviet air force, the world's largest, will be down 2,000 planes and all but destroyed.

June 30: After a series of catastrophic failures, Joseph Stalin orders the execution of the military leadership on the Soviet Union's western front.

Flamethrowers effective against tanks: All sides employed flame-throwing weapons, including those mounted on vehicles, such as the British Army's "Crocodile" Churchill tank. Other flame-throwing weapons were man-packed and operated by assault engineers or infantrymen, such as the Wehrmacht's Flammenwerfer Model 35. The weapon's principal elements included a pressurized fuel container, a tube projector and nozzle, and a system to ignite the jet of flammable fuel. Flamethrowers were particularly useful against strongly constructed bunkers, pillboxes, trench systems, and similar fortifications, where external access was often extremely limited -- sometimes only through a single weapon slit or window. At close range, flamethrowers were also effective against tanks.