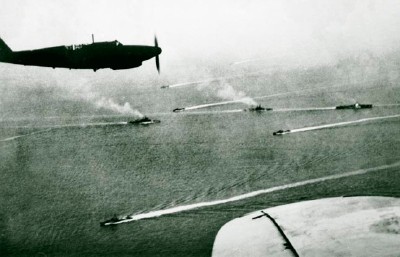 In March 1941 Yugoslavia, under intense pressure from Adolf Hitler and Nazi Germany, joined the Axis powers. This and other important World War II events from March 1941 are summarized in the World War II timeline below.

March 6: In his Battle of the Atlantic Directive, Winston Churchill underscores the importance of neutralizing U-boats and aerial assaults on British shipping.

British shipping in the Mediterranean faces a new obstacle, as Nazi Germany begins to pepper the Suez Canal with aircraft-delivered acoustic magnetic mines.

March 13: Realizing that success in Greece is dependent on an ability to move troops through Yugoslavia, Adolf Hitler steps up pressure on the Yugoslav government to join the Axis.

Glasgow, Scotland, is hit by its first significant air raid of the war. More than 230 Luftwaffe planes hit the Scottish city with hundreds of tons of explosives and tens of thousands of incendiary devices.

March 20: U.S. Undersecretary of State Sumner Welles informs the Soviet ambassador of an intelligence report with the plan for the German attack on the Soviet Union.

March 23: German U-boats are dominating the Battle of the Atlantic, sinking more than 59,000 tons of British shipping in the past week alone.

March 25: In advance of any action in the Baltic States, some 60,000 ethnically German people from Latvia, Estonia, and Lithuania have been resettled on German territory.

Facing German occupation, Yugoslavia formally joins the Axis and agrees to the provisions of the Tripartite Pact.

March 27: Yugoslavia throws a wrench into Adolf Hitler's plans when military officers, demanding a neutral Yugoslavia, overthrow the government that capitulated to the Axis, and place a teenaged King Peter II on the throne.

Below are more images and headlines depicting World War II events and the Axis aggression of 1941.

Britain wins Battle of Cape Matapan: A Royal Navy Fairey Fulmar flies air cover over the British fleet at the Battle of Cape Matapan off Crete on March 27-29, 1941. The combined force of British Royal Navy and Australian Navy ships protecting convoys bound for Greece engaged an Italian naval force. The heaviest fighting occurred after dark on March 28. Aided by radar, which the Italian ships lacked, British warships sent three enemy heavy cruisers and two destroyers to the bottom with heavy loss of life. Britain lost only a single torpedo bomber. After the battle, the Italians temporarily conceded the eastern Mediterranean to the British, who could now concentrate more on the fighting in North Africa.

Clydebank, Scotland takes heavy hits from German bombers: Because Clydebank, Scotland, with its vast areas of dockland, lay so far north, its citizens dared to hope that they were safely beyond the range of German bombers. However, on the nights of March 13-14 and 14-15, they were disabused of any such hopes when 400 bombers dropped more than 500 tons of high-explosive bombs and 2,400 incendiaries on Clydebank. In addition to devastating the docks, only eight of 12,000 houses escaped damage. Approximately 35,000 people became homeless and more than 1,000 were killed. The resulting fires were visible 100 miles away.

Keep reading for a World War II timeline about major events of March 1941, including the British victory in the Battle of Cape Matapan.

That summer, the Italians attacked the British colonies of the Sudan and Kenya and occupied British Somaliland. British (mainly African and Indian) forces faced a larger and apparently better equipped Italian army, though the Italians were cut off from resupply because of Britain's hold on Egypt.

Late in 1940, British forces advanced into Abyssinia from eastern Sudan and from northern Kenya. Meanwhile, the "Gideon Force" (British, Sudanese, and Ethiopian soldiers) under the charismatic Orde Wingate fought a guerrilla war against the Italian occupation troops. Despite early setbacks (due largely to Italian air superiority), the British soon gained the initiative thanks to the code-breakers of Bletchley Park, who read Italian messages.

Italy's fortunes continued to wane. On the Red Sea coast, British naval forces from Aden retook British Somaliland. In March 1941, the Italians decisively lost the Battle of Keren in mountainous terrain in Eritrea. Also, Wingate's troops achieved striking success in central Abyssinia. In early April, a British-Indian-African and South African force advancing from Kenya entered the Abyssinian city of Addis Ababa. By the end of the year, the isolated Italian forces had to surrender.