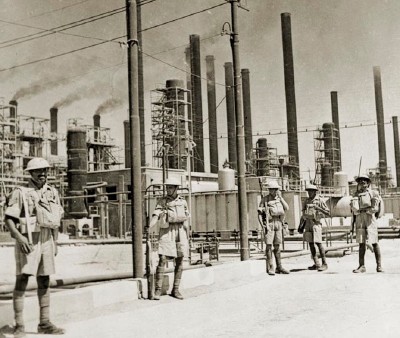 In April 1941 Adolf Hitler assured Japan he would fight the United States if Japan were to attack the U.S., setting the stage for Pearl Harbor eight months later. The World War II timeline below summarizes this and other important events of World War II.

March 28: The Italian fleet is decimated and nearly 2,500 sailors die when the British sink three of its cruisers and two destroyers at the Battle of Cape Matapan.

The Eagle Squadron, comprised of American pilots operating under the British flag, is ready for battle.

Plutonium-239, a uranium isotope that will prove critical in the development of nuclear weapons, is discovered by a team of American physicists.

March 30: The U.S. Navy commandeers ships flying the flags of Axis nations stationed in ports across the United States.

April 2-3: Count Teleki, the prime minister of Hungary, takes his own life because Hungary is joining Germany in an invasion of Yugoslavia, with which he had signed a non-aggression treaty.

April 3: Stafford Cripps, the British ambassador to Moscow, delivers a warning to Joseph Stalin from Winston Churchill that an attack on the Soviet Union by Nazi Germany could happen any day.

April 4: Under pressure from the advancing Allies, the Italians abandon the Ethiopian capital of Addis Ababa. South African troops will occupy the city for the Allies on the 6th.

Adolf Hitler assures Japanese leaders that Germany will fight the United States if Japan attacks the U.S. in the Pacific.

The gulf between Adolf Hitler and Joseph Stalin grows when Yugoslavia signs a non-aggression treaty with the Soviet Union, drawing the ire of the Nazi Germans.

Below are more images and headlines about World War II events from April 1941.

British unwelcome in Iraq: Indian troops guard an Iraqi oil refinery in 1941. Iraq had been independent since 1932, but Britain retained privileges there. The British maintained air bases at Habbaniya and Basra, had the right to pass troops through Iraq, and held commercial interest in oil refineries. The wartime government was initially pro-British, but on April 3, 1941, pro-Axis Rashid Ali El-Ghailani became prime minister following a coup. Britain dispatched a brigade to Basra, but Rashid Ali refused entry to further brigades until it left. Iraqi troops surrounded Habbaniya, but British aircraft and the garrison defeated them by early May. British reinforcements arrived, and Rashid Ali fled to Germany.

Colonial soldiers defended and extended the British Empire as early as the 18th century, with the volunteer, professional Indian Army proving its worth during the Great War. From the beginning to the end of World War II, this combined force expanded from 200,000 men to 2.5 million.

Indian divisions served in the Middle East, North Africa, Italy, Malaya, and Singapore, and constituted the bulk of British forces in Burma. Increasingly mechanized and led by Indians at battalion level, they formed the basis of what would be the regular post-independence armies of India and Pakistan. Large numbers of Gurkhas (brave warriors from Nepal) and the traditional "martial races" volunteered, but the British Indian Army also recruited across India's ethnic spectrum.

Colonial troops generally remained loyal. However, the Burma Rifles proved unreliable, while gunners of the Ceylon Garrison Artillery mutinied on the Cocos Islands in 1942. Moreover, the Indian Army's rapid expansion in 1940-41 led to demoralization and disasters in Malaya. It also led to the loss of about 40,000 men who surrendered in Singapore to the Japanese, who subsequently assigned them to the Japanese-controlled Indian National Army. However, the Indian Army remained "loyal to its salt" despite defeats as well as famine and nationalist unrest in India itself.