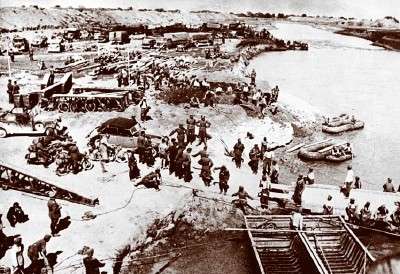 The beginning of April 1941 saw Nazi Germany coming to Italy's rescue in north Africa and annihilating Yugoslavia. The World War II timeline below summarizes this and other important events from April 1941.

April 6: A four-front attack overwhelms Yugoslavia, as the German army storms the country from Bulgaria, Romania, Hungary, and Austria. Belgrade, the capital, is destroyed and thousands are killed when the Germans initiate their invasion with a Sunday attack.

April 7: London severs all ties to Budapest, as Hungary is now wholly under the influence of Nazi Germany.

Britain's plans to help defend Greece are complicated when Luftwaffe bombers blow up a ship packed with explosives in the port of Piraeus, damaging critical port infrastructure in the process.

April 9: Concerned that Berlin has designs on bases in Greenland, the United States obtains the rights to provide military protection to the remote but strategically located island.

In Croatia, a pro-German region of Yugoslavia, Germany and Italy create a puppet state as German troops approach the Croatian capital of Zagreb.

April 9-10: Berlin is badly damaged and the State Opera House is gutted during a large British Royal Air Force (RAF) attack on the city.

The USS Niblack, a destroyer on a rescue mission off the coast of Iceland, drops depth charges near a German submarine. The incident is the first case of American hostile fire directed at a German ship.

April 12: A German panzer corps takes the Serbian capital of Belgrade, Yugoslavia, while the Croatian people of Zagreb welcome the German army invasion.

Below are more images and headlines detailing events of World War II and the Axis campaign of 1941.

German troops storm Greece: Adolf Hitler had no desire to conquer Greece in 1941. However, after Benito Mussolini's imprudent invasion of the eastern Mediterranean nation failed early in 1941, the Führer had no choice but to come to his partner's rescue. On April 6, 1941, the Germans launched their invasion of Greece from Bulgaria, which had recently joined the Axis. Pictured here are German troops crossing the Pineios River in the Greek region of Thessaly, using boats and a makeshift bridge. By May 11, mainland Greece and all of its surrounding islands except Crete were fully under Axis occupation. Some 50,000 British troops were forced to hastily evacuate Greece.

In April 1941 Rommel's Afrika Korps rolled across north Africa. Read about this and other World War II events on the timeline, next.

In September 1940, the U.S. Congress passed the Selective Service Act. The nation's first peacetime draft, it called for the registration of all male citizens from 21 to 35 years of age. The act also addressed the issue of conscientious objection. In order to qualify prior to the Second World War, one would have to prove to his local draft board that he belonged to a pacifist religious sect, such as the Mennonites or Quakers. With the passage of the 1940 law, the definition was broadened to include objections based on "religious training and belief." Most of the Allied nations used similar criteria.

In the U.S., those designated conscientious objectors (COs) were placed in one of three categories: those agreeing to enter the military in a noncombatant role, such as medics; those willing to join the Civilian Public Service; and those refusing to take part in any military or alternative service. About 25,000 COs agreed to serve as non-combatants, including Desmond Doss, who would win the Congressional Medal of Honor as a medic. About 12,000 worked in public projects during the war, and 6,000 were sent to prison for failure to cooperate with the draft board.

The Soviet Union and the Axis nations did not acknowledge conscientious objection and publicly boasted that none of their countrymen opposed military service. Secretly, any dissenters were thrown into prison, where many were executed.