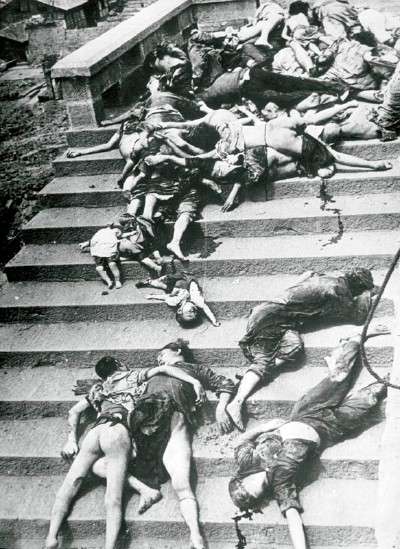 In May 1941 Rudolf Hess, one of Adolf Hitler's deputies, flew alone to Scotland in a bizarre attempt to broker a peace deal. The World War II timeline below details this and other events of May 1941.

May 2: The pro-Axis government of Iraq calls for German assistance as Britain occupies Basra and its surrounding oil fields.

May 5: Though apprised by Tokyo of the fact that Japan's secret Purple code is most likely compromised, the Japanese ambassador to the United States determines that is not the case, and makes no changes to the code.

May 7: Joseph Stalin is named Soviet premier by the Politburo.

The German vessel München is captured in the North Atlantic, with a complete cipher book on board. Two days later, Royal Navy divers will access a sunken German U-boat that includes an Enigma machine complete with rotor settings and another cipher book. These discoveries will lead the Allies to break the Enigma code and change the course of the Battle of the Atlantic for several months.

May 10: In a bizarre incident, third-ranking Nazi Rudolf Hess flies to Scotland solo and parachutes into British custody, claiming that he is there to negotiate peace with Britain. Adolf Hitler suggests that Hess has taken leave of his senses.

May 10-11: London is hit with its most intense Luftwaffe bombing raid of the war. Nearly 1,500 lives are lost, and landmarks such as the British Museum, House of Commons, and Westminster Abbey are badly damaged.

May 12: The British Army in North Africa, desperately short on material, is given a new lease on life when a British convoy reaches Alexandria, Egypt, with some 240 tanks and 40 Hurricanes.

May 14: Some 3,600 Jews are arrested and detained in Paris by the occupying Nazi Gestapo.

The headlines and images below detail more events of World War II and the battle between the Axis and the Allies.

Japanese air raids lead to panic in Chungking: Corpses litter the stairs to an air-raid shelter in Chungking, China. The deceased were victims of a mass panic during a Japanese air raid in June 1941; more than 4,000 died after ventilators in the shelter broke down. Despite this tragedy, the provisional capital of Chungking was better prepared than most Chinese cities to survive enemy air attacks. Civilians there could take refuge in a network of caves and tunnels. Most other cities offered no protection from air attack. With little opposition in the skies, the Japanese repeatedly bombed Chinese cities, killing tens of thousands of civilians and leaving untold numbers ­homeless.

The next section contains a timeline detailing major World War II events of mid-to late May 1941.

was the main fighting force of the Chinese Communist Party. Comprised of regular troops (as opposed to local forces and part-time militia), it served in North China as part of the so-called United Front of Communists and Nationalists.

Zhu De was the Eighth Route Army's military leader, while its political leader was Mao Zedong, who chaired the party's Military Affairs Committee. Though it was nominally part of the Chinese National Army, the Eighth Route Army's leaders never considered it bound by that force's orders. Moscow directed Eighth Army leaders to cooperate with Nationalist forces, but Mao and his subordinates disobeyed, and they continued their guerrilla war against the troops of anti-Communist Chiang Kai-shek. Chiang was unable to defeat the Eighth Route Army, but in 1941 he did crush the other major Communist force, the New Fourth Army, which was previously active in central China.

While the Eighth Route Army fought a guerrilla war against the Japanese, much of its energies were devoted to positioning itself against the Nationalist central army. Generally, its men had better training and higher morale than their Nationalist counterparts in the Central Army. However, they lacked heavy equipment and lived primarily off the land. Strictly enforced prohibitions on rapacious behavior helped the Communists' popular image. The army grew in size from 30,000 in 1937 to 600,000 in 1945.