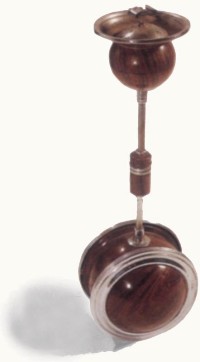 During the Great Depression and subsequent war years, railroads sometimes exhibited exuberant tastes in railroad car furnishings. This lounge car ashtray was intended to tilt with the motion of the car.
Sanderson Photography, Inc.

World War II would prove to be the zenith of public rail transportation. More people and materials than ever before had to travel, and nearly everything moved by rail. Demand increased spectacularly. In 1940, steam railroads handled 378,343 million ton-miles: about 62 percent of all freight. This nearly doubled by 1944 to 745,829 ton-miles, representing 70 percent of all freight transported in the United States. Passenger miles increased at an even greater rate during the same period, from 23,816 million passenger miles to 95,663 million passenger miles. In 1944, the peak war year, more than 75 percent of all commercial passengers traveled by rail, as did an astonishing 97 percent of military passengers.

World War II actually delayed the conversion from steam to diesel locomotives. Steam locomotive builders recognized that the existing technology had been almost fully developed by the late 1930s, and they were willing to concede the superior characteristics of diesel-electric locomotives. Most believed that the conversion from steam to diesel was inevitable, but would occur over an extended period of time as steam locomotives came to the end of their economic lives and were replaced.

It was suggested that some roads would never buy diesels because of their commitment to coal, and that smaller lines would be years in converting because of the availability of low-cost second-hand steam locomotives. The conversion would be gradual and orderly, permitting the manufacturers to invest in new production facilities. The principal builders -- Baldwin, Alco, Lima -- expected to compete against one another for locomotive orders long into the future.

The reality was quite different. Despite the higher cost -- a diesel-electric locomotive cost two and one -- half times as much as a comparable steam locomotive-most railroads were eager to change over as quickly as possible. Wartime production restrictions limited the numbers and types of diesel locomotives that could be produced, so even though they wanted diesels, the railroads, strapped for motive power, had to continue buying steam locomotives.

More than 4,000 locomotives were built for domestic use during the war. The most memorable year was 1944, distinguished by production of the last and best examples of several remarkable steam locomotive designs, including the Union Pacific 4-8-8-4 Big Boys and 4-6-6-4 Challengers, Santa Fe's 4-8-4 Northerns, Baltimore & Ohio's 2-8-8-4s, and Southern Pacific's 4-8-8-2 cab-forwards.

The War Production Board restricted the designing of new steam locomotives, establishing production criteria that were intended to make locomotives more useful during wartime. This resulted in Southern Pacific's 4460-class engines having smaller drivers than their prewar sisters, and the design being copied for the Western Pacific and Central of Georgia. Even the proud Pennsylvania found itself building locomotives derived from a Chesapeake & Ohio design.

Despite restrictions, there were also brave attempts to improve the steam locomotive. The Pennsylvania Railroad was the leader in this direction, developing a direct-drive steam turbine locomotive, two different four-cylinder locomotives, and the shark-nosed T-1 4-4-4-4s. These efforts did little to stem the tide of dieselization: 608 diesel-electric locomotives were built in 1944, compared with 491 steam locomotives. The first Class 1 railroad to fully dieselize was the New York, Susquehanna & Western, which replaced 29 steam locomotives with 16 Alco diesel-electrics between 1942 and the summer of 1945.