by Josh Clark
Prev NEXT
4 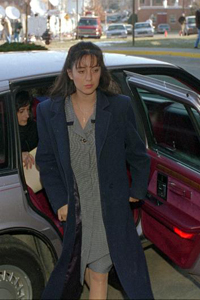 Lorena Bobbitt arriving at court for the malicious wounding case against her in 1994.
Steve Helber/AP Images

Lorena Bobbitt understandably served as the punchline to late night monologues for some time after she cut off her husband's penis. Yet her story is much sadder -- and hopeful -- than it appears at first blush.

The former Mrs. Bobbitt alleges that her ex-husband victimized her, using physical violence and even marital rape as a means of maintaining control over her. In 1993, on the night she got her revenge, she says John Wayne Bobbitt came home intoxicated, then assaulted and raped her. After he fell asleep, she retrieved a carving knife from their kitchen and used it to remove his penis. She left the house with it, driving some distance at around 3 a.m., before she rolled down her car window and tossed the dismembered organ out of the car.

She maintains she doesn't remember cutting off the penis, and her ex-husband was acquitted of domestic abuse charges. His penis was surgically reattached. They divorced in 1995.

As a result of her first marriage, Lorena became an advocate for victims of domestic abuse. She's founded Lorena's Red Wagon, an aid organization for women who've been abused. In 2003, John Wayne Bobbitt was convicted on domestic abuse charges unrelated to his first wife, Lorena.