by HowStuffWorks.com Contributors
Prev NEXT
10 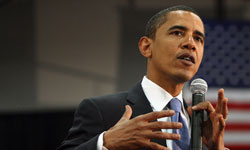 Name a defining moment of the 2004 presid­ential elections. Can't think of one? Can you remember the candidates who squared off? Their running mates? It'll be a long time before anyone forgets the faces and events of the 2008 elections. While John McCain put Wasilla, Alaska, on the map and lured comedian Tina Fey back to "Saturday Night Live" after tapping Gov. Sarah Palin as his running mate, the Democratic Party was making strides toward history. Months before the Democratic Convention, it appeared that the two strongest candidates for the party's nomination were Sen. Barack Obama and Sen. Hillary Clinton. While Clinton would be remembered as the first woman in U.S. history to make a serious bid for the presidency, Obama became the country's first black president. The Obama fundraising campaign was also one of the most lucrative in history, and his platform of change attracted a significant portion of the youth vote. The Obama and Clinton campaigns became forever intertwined when President-elect Obama chose Clinton as his secretary of state. For more on these history-makers' campaigns and political careers, read How Barack Obama Works and How Hillary Clinton Works.