by HowStuffWorks.com Contributors
Prev NEXT
8 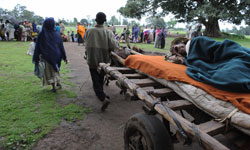 The global food shortage provoked an instance of cannibalism in Russia, and in Kuyera, Ethiopia, it has led to severe cases of malnutrition.
Roberto Schmidt/AFP/Getty Images

In some nations around the world, there's a­ real dearth of food -- and what food is available is awfully expensive. Rising food prices are indicative of a new kind of demand: Harvests are being turned over to biofuel initiatives. Corn and grain harvests in particular are gold mines for biofuel experiments, and not enough has been rationed for the people who depend on the output for the mainstay of their diets. For the first time since the 1970s, the food shortage is a global-scale issue, not a small-scale problem related to local farms turning out poor harvests. When the situation gets particularly dire, people go hungry or become desperate. In late October, The Moscow Times reported that a homeless man from Kamchatka and two accomplices were arrested for murdering a man, butchering his body, frying and eating it. A wake-up call for the world's agricultural community? Perhaps, but cannibalism can be motivated by more than just hunger, though it's rare to hear about it in the 21st century. Whether it's a case of survival, ritual or malice, you can read about the practice's origins in How Cannibalism Works.