by HowStuffWorks.com Contributors
Prev NEXT
4 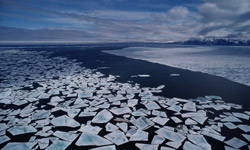 Ice floes in the Arctic look like broken glass. If this melting keeps up, the Northwest Passage could open for business.
Richard Olsenius/National Geographic/Getty Images

About 500 years ago, explorers began searching for a shortcut between Europe and Asia. The tantalizing idea of a shorter route between the continents w­as once the stuff of fiction, but then sailors stumbled upon an icy path from Baffin Bay to the Bering Strait connecting the Atlantic and Pacific Oceans. But like many shortcuts, the hassle of traversing the iceberg-ridden Northwest Passage nearly negates the convenience of the route. In fact, it has never been completely passable until now. The European Space Agency (ESA) published satellite images of the region that showed melting Arctic ice and a nearly obstacle-free waterway. While it's bad news for environmentalists, the melting ice brings glad tidings for businessmen. As the Panama and Suez Canals become more heavily trafficked, the prospect of using the Northwest Passage has Canada, Denmark, Norway, Russia and the United States clamoring for rights to the waterway. For now, the countries are sitting tight, but if the region continues to thaw, the question on everyone's mind is: Could the Northwest Passage open for business?