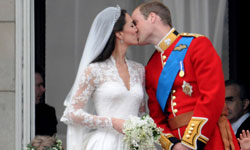 The wedding of 2011. See more pictures of 2011.
George Pimentel/Getty Images

Although the Oxford English Dictionary traces it back to 1854, the phrase "pop culture" became part of mainstream vernacular in the late 1970s thanks to Bowling Green State University professor Ray B. Browne [source: Fox]. Browne initiated the nation's first popular culture academic department, attracting criticism along the way from those who considered the subject matter little more than trendy detritus.

Undoubtedly, much of pop culture merely clogs up our media and minds like a hairball snowballing in a shower drain. In 2011, for instance, the United States came down with wedding fever, paying nearly as much attention to reality princess Kim Kardashian's nuptial nightmare as it did to the union of bona fide royal Prince William to Kate Middleton -- now the Duchess of Cambridge, of course. In between those spring and autumn ceremonies, we filled up Facebook albums with photos of ourselves lying face down on random surfaces, planking with juvenile abandon.

But as Professor Browne, who died in 2009, would likely admonish, it wasn't all that bad, really. Maybe we still can't seem to scrub Rebecca Black's "Friday" from our frontal lobes, but the stuff of 2011's water cooler conversations contained kernels of credibility and nuggets of noteworthiness. Case(s) in point: 2011's Smartest Moments in Pop Culture.