by Cristen Conger
Prev NEXT
15 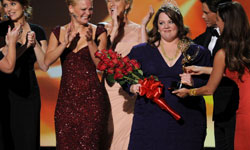 Melissa McCarthy's Emmy Award for "Best Lead Actress in a Comedy" for her role as Molly in the sitcom "Mike & Molly" signaled a larger sort of win for women in Hollywood that began with the May 2011 release of the comedy "Bridesmaids." McCarthy, who co-starred in the film alongside Kristen Wiig and Maya Rudolph, received rave reviews among film critics for her physical and character-based comedic skills. By July, "Bridesmaids" had beat out the "Sex & the City" franchise to become the top-grossing female-centered comedy in cinema history, demonstrating that funny ladies on screen like McCarthy can attract both female and male viewers to the box office [source: Rosen]. Some even questioned whether that big screen breakout helped garner the unexpected Emmy [source: O'Neil].