by Cristen Conger
Prev NEXT
5

Who Is Arcade Fire? 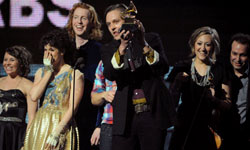 When the members of Arcade Fire stepped onto the stage to accept their trophies for Album of the Year, many people watching the Grammy Awards ceremony scratched their heads and thought -- or tweeted -- six little words: "Who the heck is Arcade Fire?" The five-piece band hailing from Canada beat out mainstream heavyweights Eminem, Lady Gaga and Katy Perry, along with alt-country Lady Antebellum, for the night's top prize. And although their album "The Suburbs" sold 400,000 copies and had won praise among critics, they certainly were a dark horse winner, unfamiliar to so many that it spawned an Internet meme known as "Who is Arcade Fire?" [source: Abebe].

Despite the public incredulity, Arcade Fire didn't have nearly as tough a post-Grammy storm to weather as Esperanza Spalding, jazz singer and winner of Best New Artist. Since Spalding edged out Justin Bieber, legions of the pop idol's fans took their rage online, vandalizing her Wikipedia page and flooding message boards and comments sections with obscenities and death wishes [source: Wright].