by Cristen Conger
Prev NEXT
4

McQueen at the Met 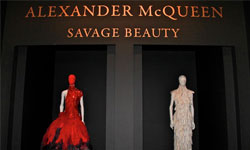 Fashion designer Alexander McQueen's suicide in February 2010 sent shock waves through the industry and triggered an outpouring of posthumous adoration for his elaborate couture confections. In homage to the icon, the Costume Institute at the Metropolitan Museum of Art organized an exhibit, "Savage Beauty," to celebrate the sartorial legacy he left behind. Highlighting the intersection of fashion, sculpture and conceptualization, "Savage Beauty" was one of the most lauded artistic events of the year. As many as 15,000 people per day waited in line to glimpse the captivating wardrobe, which included Duchess of Cambridge Catherine Middleton's wedding dress [source: Cardwell]. Viewed by more than 660,000 visitors, the McQueen exhibit now ranks as the Costume Institute's most popular one to date and the Met's eighth most-popular [source: Sun].