by Cristen Conger
Prev NEXT
14 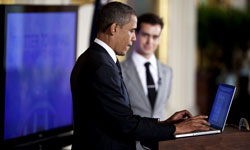 These days, it seems that with great power comes great responsibility -- and a Twitter account. Why else would President Barack Obama and Pope Benedict XVI turn to Twitter to capture popular attention?

Over in Italy, it wasn't exactly holy scripture, but Pope Benedict's first 140-character instant message was nevertheless a groundbreaking intersection of technology and religion. In June 2011, the pope sent out his famous tweet to promote a news site launched by the Vatican [source: Townsend]. A month later in July 2011, President Obama jumped on the Twitter train as well during an online town-hall event [source: Townsend]. Casually signing his live tweet "bo," the President asked for suggestions on how to cut spending in order to reduce the federal deficit.