by Cristen Conger
Prev NEXT
12 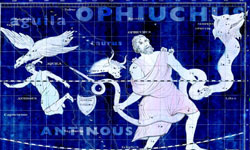 Ophiuchus briefly threw the zodiac out of whack in January 2011.
Buyenlarge/Getty Images

In January 2011, a Minnesota astronomer broke the terrifying news of a 13th zodiac sign, Ophiuchus. Speaking to the Minneapolis Star-Tribune, star gazer and board member of the Minnesota Planetarium Parke Kunkle told the newspaper that a "wobble" in Earth's axis had shifted the alignment of the sun and stars, which differentiates Cancers from Libras and so forth [source: Pappas]. As a result, the accurate alignment of Earth and stars indicated that people born between Nov. 29 and Dec. 17 were no longer bow-and-arrow wielding Sagittarii but serpent bearers of the Ophiuchus sign, derived and later discarded by ancient Babylonians.

Although astrology isn't a revered science, the negative reaction was somewhat understandable, considering 25 percent of Americans believe in horoscopes [source: Braiker]. Media outlets around the country immediately jumped on the zodiac story, overwhelming astrologers and astronomers alike with interview requests as the general public took to social media in outrage against Ophiuchus. Come to find out, however, Kunkle's zodiac news wasn't new by a long shot. A guy named Aristarchus of Samos detected the zodiac-shuffling wobbling of the Earth's axis, a gravitational effect known as precession, circa 280 B.C. [source: Pappas]. But that wobble doesn't make a difference in one's horoscope, astrologers quickly pointed out to inquiring journalists, because the most commonly used zodiac calendar hinges on planetary, not constellation, alignments [source: Braiker].

Almost as soon as the news broke, astronomers and astrologists alike debunked the 13-sign calendar, tossing out Ophiuchus as quickly as he had elbowed in between Sagittarius and Scorpio. Tripped up by pseudoscience, people nevertheless learned about the lesser-known intricacies of astrology.