by Cristen Conger
Prev NEXT
10 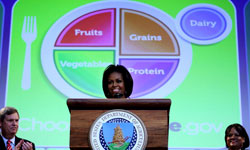 After 19 years of attempting to steer Americans in the right nutritional directions, the food pyramid entered retirement in June 2011 [source: Melnick]. During the food pyramid's tenure, the American waistline had expanded, and according to the Centers for Disease Control and Prevention (CDC), about one-third of adults in the United States were obese in 2010 [source: CDC]. The icon doesn't bear the entire blame for the national obesity epidemic, but critics long complained that it encouraged overeating [source: Knox].

In place of the arguably confusing pyramid, the U.S. Department of Agriculture and the Department of Health and Human Services unveiled "My Plate," a circular icon quartered into fruits, vegetables, grains and protein segments; dairy sits in a small separate circle beside the main "plate." The "My Plate" campaign also coincided with first lady Michelle Obama's campaign to curb America's obesity epidemic.

Some nutritionists criticized "My Plate" for disregarding the protein derived from grains and dairy, and others considered the campaign a waste of $2 million in taxpayer funding [source: Barmann]. Despite the tepid media response, "My Plate" was perceived overall as an improvement. Speaking to The New York Times, New York University nutrition professor Marion Nestle commented, "It's better than the pyramid, but that's not saying a lot" [source: Neuman].