by Cristen Conger
Prev NEXT
8 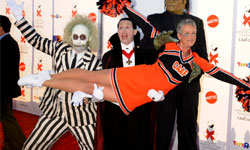 In November, fans of the NBC sitcom "Community" expressed concern that the network hadn't included the show in its mid-season lineup [source: Moylan]. As of December 2011, the network had yet to officially cancel the sitcom, leaving it in a state of television limbo. During its three seasons on air, "Community" had attracted a diehard fan base that followed its running gags, savvy pop culture references and clever writing with unabashed glee. Perhaps as a thank-you gift to its adoring viewers, "Community" writers brought an inside joke to fruition after three years of buildup, providing a high point in 2011 television.

Characters have mentioned "Beetlejuice" once every season, and in accordance with Beetlejuice lore, on the third name drop in the third season, the striped suit-wearing ghost appeared in the background. Writers for the Web site Reddit first noticed the sly slip, and a video mashup of the three Beetlejuice references quickly spread around the Internet [source: Abramovich].