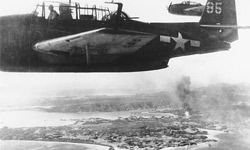 Although most of the battles in this list took place in the European and Russian theaters of the war, the island of Okinawa was the site for one of the bloodiest battles in the Pacific theater. This conflict, which is considered the biggest land-air-sea battle ever, spanned several months and claimed the lives of thousands on each side [source: Feifer].

Controlled by the Japanese, Okinawa (the largest of the Ryukyu Islands) was a key strategic location that the United States sought in its campaign against Japan. The U.S. forces invaded in March 1945. The Japanese responded with devastating air attacks using kamikaze pilots who intentionally steered their planes into U.S. ships. The Japanese also held back on launching their major ground counterattack until U.S. troops got more inland and out of range of naval support [source: Encyclopaedia Britannica]. Although the U.S. troops eventually prevailed, it took months of bitter fighting that didn't end until June.

More than 100,000 Japanese soldiers and 12,000 American soldiers died in Okinawa. This isn't including those wounded, which for the U.S. forces amounted to 36,000 soldiers [source: Encyclopaedia Britannica]. Tragically, some estimate that Okinawan civilians made up 150,000 of the dead left in the battle's wake [source: Feifer].