The Invasion of Normandy 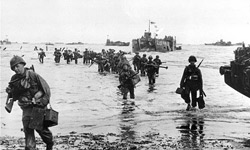 American assault troops move onto a beachhead during the D-Day invasion of German-occupied France on the beach of Normandy, June 7, 1944.
AP Photo/U.S. Signal Corps

As one of the most famous battles ever, the invasion of Normandy was also among the bloodiest. This long-awaited Allied invasion into Nazi-occupied territory was a pivotal victory for the Allies.

The offensive launched on the morning of June 6, 1944, now known simply as D-Day. British, U.S. and Canadian troops landed on five beaches along the shore of Normandy. From the early morning hours, the Allies used air support to bomb the German troops stationed there. Although it was meant to be a surprise, German forces were somewhat prepared for an invasion and didn't go down without a gruesome fight. As the months wore on, the Allies fought for control of Norman towns, including Cherbourg and Caen.

The whole invasion spanned several months and lasted until the end of August. Casualties were high on both sides: Estimates peg German casualties at a staggering 320,000 (30,000 dead, 80,000 wounded and the rest missing) and Allied casualties at about 230,000 (more than 45,000 dead) [source: Encyclopaedia Britannica].