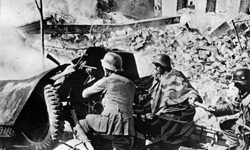 By mid­-1942, Nazis set their eyes on Stalingrad, a city that stretches along the Volga River. It was an industrial city that not only produced military supplies but also would serve as a key strategic hold in their invasion of Russia. The Nazis attacked the city with air raids and came on the ground with more than 150,000 soldiers and about 500 tanks [source: Roberts].

The Nazi commanders expected a relatively easy win, but a relentless Soviet army held strong. The battle raged for about five months as streets filled with machine gunfire. By November, Soviets launched a significant counterattack to keep the invaders at bay. The German forces exhausted, they surrendered (against Hitler's wishes) by February 1943.

This was a decisive battle that changed the tone of the war in favor of the Allies. And although the Soviets won, they also suffered more casualties than their enemies in the process. Axis forces had about 800,000 casualties, compared to more than 1 million on the Soviet side. In addition, about 40,000 civilians died in the conflict.