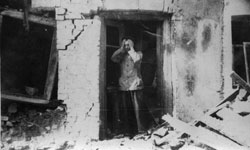 A Polish farmer stands in the doorway of his home, head in his hands in despair, and surveys the wreckage caused by a German air raid during the invasion of Poland.
Keystone/Getty Images

The invasion of Poland was the first battle of World War II and was actually a running conflict -- a string of many battles fought through the country to Germany's east and Russia's west. But because it was frequently difficult to discern where one battle stopped and another started, many historians lump the invasion of Poland into one great, bloody rout.

Basically, the invasion was the result of a pact between Germany and Russia to overrun and divide Poland. Poland, trapped in the middle between these two ambitious powers, never really had a chance.

On Sept. 1, 1939, the Germans attacked Poland from the west, and the Polish forces retreated directly into the hands of the Russians, who were waiting to attack from behind. Caught in the crossfire of this secret pact between their neighbors and awaiting aid from France and the United Kingdom that never came, 65,000 soldiers from Poland's 950,000-strong military force were killed, more than 133,000 were wounded and the rest were considered captured. Fifty-nine thousand soldiers from the USSR and Germany were killed or wounded [source: The Atlantic Monthly].