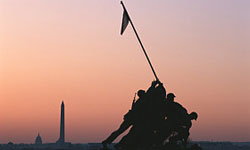 The subject of this bronze memorial in Washington, D.C., took place in the early days of battle at Iwa Jima.
Andrea Pistolesi/Riser/Getty Images

Though the number of troops killed on Iwo Jima doesn't rival some of World War II's other battles, the battle is notable for the percentage of troops killed. On Iwo Jima, Japanese troops fought to the death -- of the nearly 22,000 Japanese troops who started the battle, only 216 were taken prisoner. The rest were killed. With 26,000 U.S. troops killed or injured, the Battle of Iwo Jima is the only clash of World War II in which U.S. casualties outnumbered Japanese casualties [source: Military.com].

The battle began on Feb. 19, 1945, and it was immediately clear that U.S. troops were facing a resolute and well-prepared enemy. The island, whose name means "sulfur island" in Japanese, smelled like just that, and concealed a labyrinth of underground tunnels. Troops recalled that after fighting a bloody battle to take a hill, they would soon find themselves facing an enemy that had tunneled beneath them to the rear. Within the island's highest mountain, Mount Suribachi, at 556 feet (169 meters) above sea level, the Japanese had dug a seven-story base filled with weapons and supplies [source: History.net].

The battle for this small island took 36 days [source: History.net]. In fact, the classic picture of U.S. Marines raising a flag on Mount Suribachi was taken in the early days of the battle, with still a month to fight. As with the Vietnam War, the U.S. troops were adept at taking a defined objective like the Mount, but had more difficulty mopping up the less defined targets of underground and embedded troops.