The lowly fruitcake, rich in candied fruit, nuts and spices, and heavy with rum and brandy, has become a much-maligned confection that doubles as a punchline. But the joke may be on us.

While we succumb to rising seas, roaming zombies or warring dictators, the lowly fruitcake hunkers down for survival. Fruitcakes may outlast us all. Case in point: A 106-year-old fruitcake, still in its original tin, has been discovered at a Cape Adare outpost in Victoria Land, East Antarctica. And according to conservationists, it's "almost" edible.

The fruitcake was discovered preserved in its original wrapper and placed inside a tin.
Antarctic Heritage Trust

Stored properly, a fruitcake can easily age 25 to 30 years and still be eaten, but more than a century? The aged fruitcake, found wrapped in wax paper inside a tin, spent the majority of the 1900s in a long-abandoned research station. It dates back to the Terra Nova Antarctic expedition, which was conducted from 1910 to 1913, of Robert Falcon Scott, a British explorer who listed the foodstuff among the camp's inventory.

A New Zealand-based team from the Antarctic Heritage Trust recovered the fruitcake and about 1,500 other artifacts from the historic huts at Cape Adare. The huts, which were the first ever built on Antarctica, were fashioned in 1899 by Carsten Borchgrevink, a Norwegian explorer, and used again in 1911 by Captain Scott and other members of his expedition.

Two months after the team launched the foray to the geographic South Pole, Scott and his team finally achieved their goal on Jan. 17, 1912, only to discover a Norwegian flag. It had been planted and left by explorer Roald Amundsen, who had become the first human to reach it 33 days prior. Blizzards delayed their return, and Scott and his team died at the end of March 1912; their bodies and diaries were found eight months later, and the huts they once occupied have become a historic monument.

Captain Scott's Terra Nova Expedition listens to music in their hut in 1911 during their multiyear voyage in search of the South Pole.
Herbert Ponting/Historica Graphica Collection/Heritage Images/Getty Images

The conservationist team that recovered the Scott artifacts began working on the site in May 2016. Other items, including meat, fish and canned jams, did not fare as well as the fruitcake.

"There was a very, very slight rancid butter smell to it, but other than that, the cake looked and smelled edible," said Lizzie Meek, the trust's program manager for artifacts, in a statement. "There is no doubt the extreme cold in Antarctica has assisted the preservation."

At a specialized lab in the Canterbury Museum in Christchurch, New Zealand, the fruitcake's container will undergo rust removal, chemical stabilization and a repair of the wax paper covering the fruitcake. The cake, however, will be left to its own devices. After proper restoration, the fruitcake will be returned to the hut where it was found in the Antarctic, which is now part of an Antarctic Specially Protected Area.

In 2009 this Sunlight-brand soap was recovered from the Terra Nova hut at Cape Evans on Ross Island, Antarctica, along with 8,000 other artifacts to be restored and preserved.
Antarctic Heritage Trust/Barcroft India/Getty Images
Preservationists are working to restore the interior of the huts used by historic expeditions to find the South Pole.
Sue Flood/Getty Images
A memorial to Captain Robert Falcon Scott sits at Cape Evans, Antarctica. Active volcano Mount Erebus is pictured in the background.
Alasdair Turner/Aurora Open/Getty Images
Now That's Interesting
The Apollo 11 space mission took a pineapple fruitcake on a round-trip journey into space; the uneaten cake is now part of a display at the Smithsonian Air and Space Museum in Washington, D.C.

The Opioid Crisis Is Hitting Some States Especially Hard 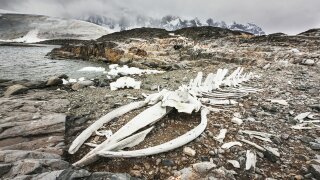 Skeletons and Mummies Litter the Shores of Antarctica 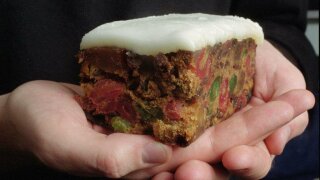 Though Few Admit It, National Fruitcake Day May Be a Fave Fake Holiday 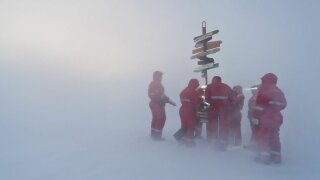 Scientists Reveal What Living and Working in Antarctica Is Really Like