How the Black Panthers Worked 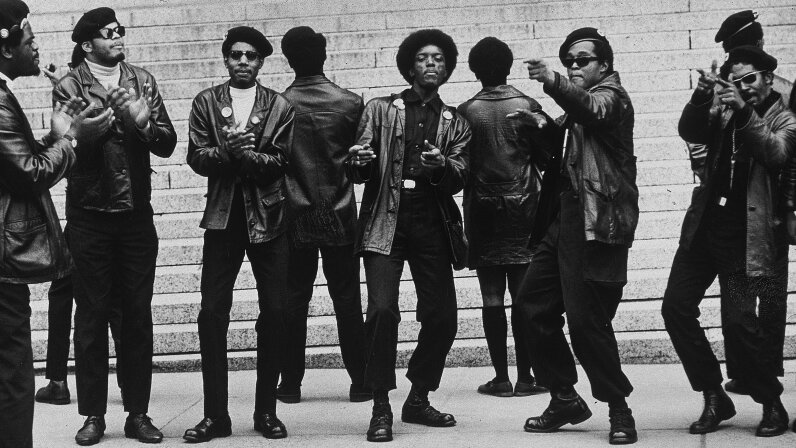 Members of the Black Panther Party demonstrate outside the Criminal Courts Building one month after 21 Panthers were charged with plotting to dynamite city stores, a police station and a railroad right-of-way, New York City. Jack Manning/New York Times Co./Getty Images

"[Huey Newton said], 'You know, the nature of a panther — I looked it up... If you push it into a corner that panther is going to try to move left or right to get you to get out of the way. But if you keep pushing it back into that corner sooner or later that panther is going to come out of that corner and try to wipe out who keeps oppressing it in that corner.' I says, 'Wow, Huey, That's just like black people —we're pushed in a corner.'"

The Black Panther Party was founded in 1966 by Merritt College students Bobby Seale and Huey Newton in Oakland, California [source: Duncan]. The pair was frustrated by persisting racial inequalities in police treatment, housing, education, health care and other fundamental areas.

But a big part of their platform was self-defense — defending themselves (and other African-Americans) from the police and other people who might want to hurt them. Newton and Seale thought the non-violent civil rights movement championed by Rev. Martin Luther King, Jr. was moving too slowly, and they identified instead with the more radical ideologies put forth by leaders like Malcolm X. Indeed, the original name of the group was the Black Panther Party for Self-Defense [source: Oakland Museum of California]. The organization eventually spread to chapters in 48 states and a number of other countries, including South Africa, Japan and England [source: Duncan].

Party leaders developed a specific Ten Point Program that outlined the organization's concerns and demands. Equal opportunity for employment at a fair wage, financial reparations for the enslavement of millions of African-Americans, and access to decent housing, education and health care were among the issues listed. They also called for the release of black and oppressed prison inmates because, in the words of the program manifesto, "We believe that the many Black and poor oppressed people now held in United States prisons and jails have not received fair and impartial trials under a racist and fascist judicial system and should be free from incarceration."

The party began to elicit attention by conducting armed patrols of Oakland's poor neighborhoods, which was perfectly legal thanks to a loophole Newton discovered in state law that permitted loaded weapons to be carried openly. So, Panthers walked the streets, witnessing arrests and other police interactions in an effort to discourage brutality [source: Blake]. Not surprisingly, this tactic inspired fearful politicians to change the law, post haste, all the while driving more attention to the Panthers and their cause.

The Making of a Militant Image 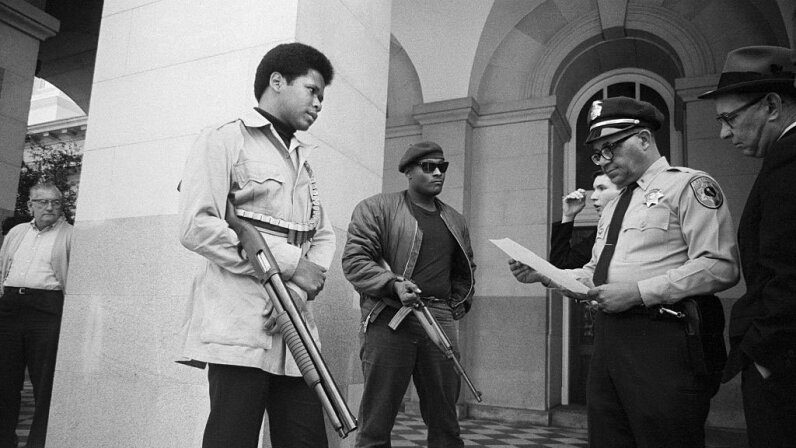 Two Black Panthers are met on the steps of the State Capitol in Sacramento by Police Lt. Ernest Holloway. Holloway told them they could keep their weapons if they did not disturb the peace. Earlier, party members had invaded the Assembly chambers and had their guns taken away. Bettmann/Getty Images

The Black Panther "look" is one of the most widely recognized in the world. When Beyoncé and her backup dancers donned black leather berets, afros and military-inspired accessories at Super Bowl 50, there was zero confusion about who they were channeling, especially in the wake of several highly criticized police shootings of unarmed black men. Long before the internet and social media made it possible for the instant and viral spread of indelible images, the Black Panthers created a group persona that both scared and inspired, depending who you asked.

Militancy was a major component of the Black Panther image, made evident by the group's armed patrol of streets and devout opposition to gun control laws. Photos depicting founding members decked out in black leather, black turtlenecks and holding guns, were popular. The image was further cemented in 1967 when several Panthers walked onto the floor of the California Assembly, black leather-clad, with loaded guns in hand. They were protesting a bill created expressly to threaten the open-carry law and therefore inhibit the group's ability to patrol [source: Blake]. Not surprisingly, the bill passed.

This highly publicized event was hardly the party's first or last brush with the law. In 1967 founder Newton was arrested and convicted of killing a police officer, but was released on appeal in 1970, likely thanks to public pressure and the well-known "Free Huey" campaign. (Incorrect deliberation procedures were blamed for the overturned conviction.) Teenage Black Panther treasurer Bobby Hutton was killed in a skirmish with police during one of the group's patrols [source: Biography]. Numerous police raids and other altercations sent dozens of Panthers to jail, or caused them to flee the country altogether.

Still, despite the militant persona often associated with the party, founder Seale claimed that their goal was not about inciting gun violence. Rather, guns (whether carried or depicted in imagery) were used to empower people struggling against a system that oppressed them [source: Weise].

The Black Panthers came up with the term "pig," still used as a derogatory reference to police officers. Huey Newton said the idea was to associate cops with "a rather low-life animal" to minimize the fear and power associated with officers [source: Blake]. 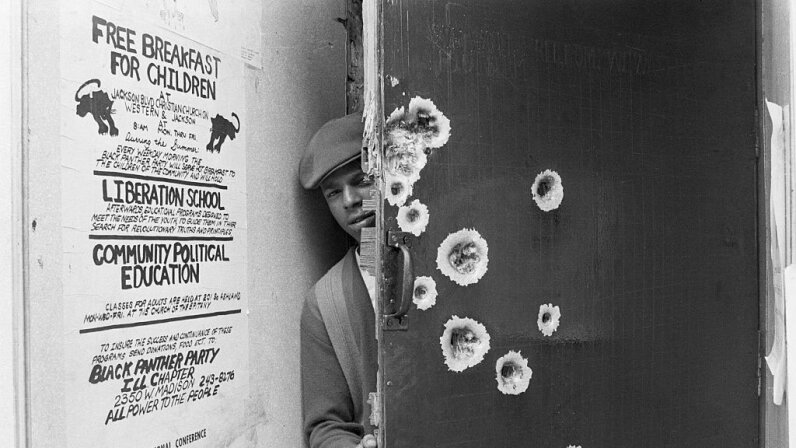 An unidentified member of the Black Panthers peeks around a bullet-pocked door which police blasted with gunfire during a predawn raid. A poster shows some of the Panthers' social programs. Bettmann/Getty Images

Militancy aside, the Black Panthers were known for emphasizing the importance of words and good works in furthering the civil rights cause. Serving the community was of paramount importance, as they believed that the only way for the black community to begin to rise above oppression was first to help them meet their basic needs. One of the ways the group accomplished this was by starting a Free Breakfast for Children program at a Berkeley-area church, which eventually spread and fed as many as 20,000 children daily in 19 cities across the country [source: Chiles].

They also set up and ran free clinics called People's Free Medical Centers (PFMC), which offered certain vaccines, testing for diseases like tuberculosis and diabetes, treatment for basic illnesses and even cancer screenings. At one point, such sites were present in 13 cities [source: Chiles]. This was a major boon for poor and underserved people who previously had little to no access to affordable health care.

The Oakland Community school was another crown jewel of the party's accomplishments. Largely free to students (it was mostly subsidized through fundraising and private donations), the school boasted small class sizes and subjects like poetry, Spanish and current events — even yoga. The idea was to empower students from a young age to know themselves (black history was part of the curriculum) and have the confidence, education and problem-solving skills to achieve their goals. Influential figures like Maya Angelou and Rosa Parks visited the school and its pupils. The school operated from 1973 until 1982 [source: Drummond].

The group also stressed education and progressive thinking among active party members, often handing out books and political magazines. Written and spoken words were tools that they used to vividly communicate the party's stances. Party leader Kathleen Cleaver recounted to CNN the story of one young man who joined the party hoping to get a gun. Instead he was handed a stack of books. The young man said to the leader of the meeting, "I thought you were going to arm me." He replied, "I just did" [source: Blake].

Contrary to popular belief, the party was unlike some other black rights groups in that the collective organization didn't label all whites as oppressors. In fact, the Panthers spoke out against elite African-Americans who encouraged oppression of the downtrodden working class, and allied themselves with progressive white groups and other minority organizations with similar philosophies [source: Duncan]. Still, all the forged friendships in the world were unable to keep the party from imploding, especially once major powers got involved.

Details of a Downfall 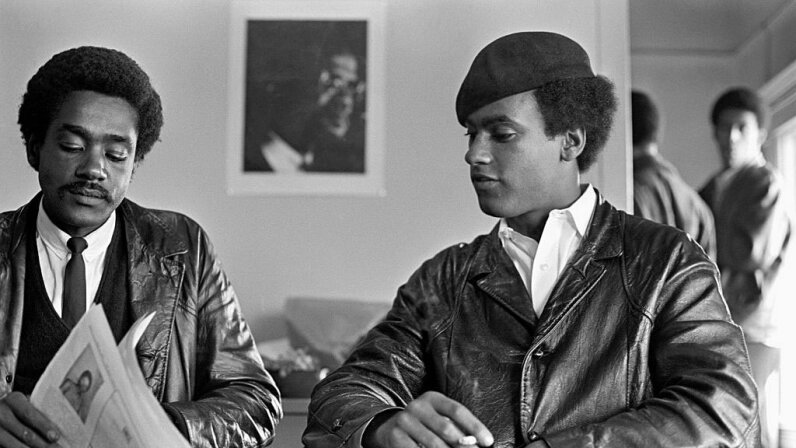 It's never a good omen for a political group when the FBI director positions you right in the government's crosshairs. In 1969, J. Edgar Hoover reportedly saw the Black Panthers as, in his words, "the greatest threat to the internal security of our country" [source: Blake]. He created a counterintelligence program known as COINTELPRO expressly to bring about the group's demise. Ironically, it was the feel-good breakfast program that most irked Hoover, because it was seen as an organizing tool that simultaneously brought racial discrepancies to the attention of up-and-coming generations [source: Elder].

COINTELPRO placed FBI informants on the inside to incite discord between members and leaders, which helped to eventually tear the party apart. Infiltrators also had a hand in encouraging violence that would eventually be used as fodder for police raids. One of the most controversial COINTELPRO raids resulted in the assassination of rising party leader and Illinois NAACP branch head Fred Hampton, only 21 years old. Working on an informant's tip, the FBI and Chicago police raided his home and shot Hampton to death while in his bed. No one was ever convicted of wrongdoing, but his family was paid a significant settlement by the city, state and federal governments [source: Blake].

Further violence in the form of a 1969 shootout between 200 L.A. police and six party members continued to see the party butt heads with the government. Fortunately, no one died in that altercation, but it was heavily publicized [source: Elder].

Although many members continued to fight for the cause, some leaders became abusive of their power and openly promoted violence. Nineteen-year-old Alex Rackley, with the New Haven chapter, a suspected FBI informant, was tortured and murdered by other party members. Ideological disagreements (some wanted to concentrate on the social programs, others on the revolutionary struggle) split the party and membership began to dwindle. A couple of party leaders, including Seale, unsuccessfully ran for office in the years following the scandals, but the party eventually collapsed in the later part of the 1970s [source: Weise].

Former leaders followed their own career and life paths in the years after the Black Panthers stalled. Founder Newton went on to earn a Ph.D. in social philosophy, but his demons caught up with him and he was killed in a drug altercation gone bad in 1989 [source: Duncan]. After being released from prison (he was convicted as one of the Chicago Eight), Seale adopted a nonviolent stance on social change, and has since become a published author, family man and advisor to political activists [source: Biography].

Kathleen Cleaver earned her law degree from Yale University after returning to the U.S. following years in exile. Her Panther-related activities continued long after the group disbanded, as she helped get party member Elmer "Geronimo" Pratt's murder conviction overturned after he served 27 years in prison. She is now a law professor at Emory [sources: Hello Beautiful Staff, African American Registry].

Today, a number of civil rights groups in the U.S. and elsewhere employ some of the same tactics and beliefs as the Panthers, including the well-known organization Black Lives Matter. Others, like the New Black Panthers, have been dubbed "a racist and anti-Semitic" hate group, and firmly disavowed by the original Panthers [source: Evans].

Love 'em or loathe 'em (and I'm guessing there's plenty of you on both sides of that opinion), it's impossible to claim that the Black Panther Party wasn't a major influence in the American Civil Rights Movement. Nor is it possible to insist that we don't still have a long way to go.

A Short History of Napoleon, the Ambitious, Charismatic Emperor of France
Ridiculous History: When an X-wing Pilot Was Questioned After Kennedy's Assassination
Did William Tell really shoot an apple off his son’s head?