Chappaquiddick and the Mystery at Dike Bridge

Browse the article Chappaquiddick and the Mystery at Dike Bridge 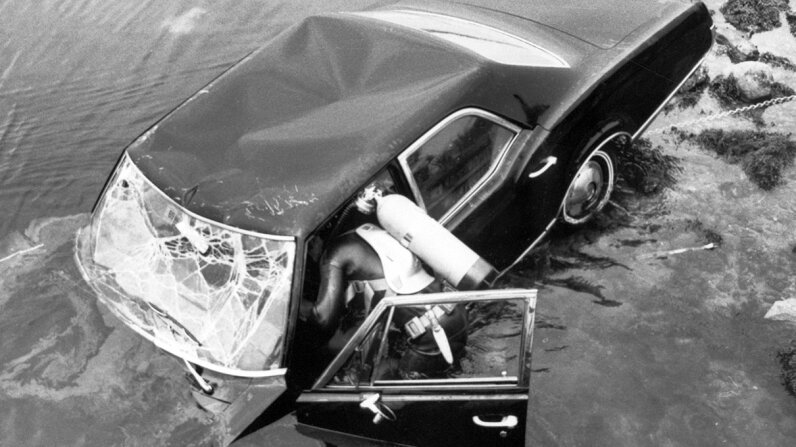 A diver attempts to raise Ted Kennedy's car hours after it plunged into a pond, killing Mary Jo Kopechne. Kennedy pleaded guilty to leaving the scene of an accident and received a suspended two-month jail sentence. Bettmann/Getty Images

The late Ted Kennedy was a beloved senator who served his country for decades. He's known for having worked across the aisle to pass landmark legislation that earned him a legacy as one of the most respected and hard-working members of the Senate. But his record wasn't squeaky clean. It had one major blip and it's likely what kept him from a successful presidential bid: the death of 28-year-old Mary Jo Kopechne in Chappaquiddick, Massachusetts in 1969.

Recently, a Hollywood movie, aptly named "Chappaquiddick," recounted the shocking event and Kennedy's involvement in Kopechne's death. Stuff They Don't Want You To Know hosts Ben Bowlin and Matt Frederick sat down with the film's screenwriters, Taylor Allen and Andrew Logan, to talk about the movie and scandal in the podcast What was the Chappaquiddick Incident?

The same weekend America was watching the first man land on the moon, Ted Kennedy threw a party at a cottage on Chappaquiddick Isle. It was a reunion for the people who worked for his late brother Robert F. Kennedy's presidential campaign. Six women, known as "Boiler Room Girls" because of the hot, windowless room where they worked, were there, including Kopechne.

Kennedy's story was he and Kopechne left the party around 11:15 p.m. because she was tired and wanted to get the last ferry back to Martha's Vineyard. Kennedy says almost immediately he took a wrong turn onto Dike Road and traveled for about a half mile (.8 kilometers) and crashed into the water beneath Dike Bridge. Kennedy managed to escape through his car window. In his court testimony, Kennedy says he tried to dive down several times to save Kopechne but was unsuccessful.

However, several of the Boiler Room Girls testified that Kopechne left her purse and hotel room key at the Chappaquiddick cottage when she left with Kennedy. And a police officer said he saw a car similar to Kennedy's heading toward the ferry at 12:45 a.m., more than an hour after they left the party together, making Kennedy's story difficult to believe.

But it was Kennedy's behavior after the accident that really raised eyebrows. He didn't report the accident for more than 10 hours, only calling the police after the car was discovered by a passerby. And after the crash, Kennedy walked 1.5 miles (2.4 kilometers) from Dike Bridge back to the cottage on Chappaquiddick Isle without ever stopping for help at any of the residences — or the fire station — he passed along the way. And it became clear after Kopechne's body was recovered that had the police been called immediately, she may have survived.

So what happened during that "missing hour" between the time Kennedy says the car crashed into the water and when the police officer claimed to see the car at 12:45? Why did Kennedy wait so long to report the crash? Was he trying to hide something? Did the Kennedy family's political machine help him cover something up?

Not many of the conspiracy theories concerning this case hold up to investigation, but the accident certainly changed Ted Kennedy's life, and put a period on the all-too-short life of the intelligent and well-liked Mary Jo Kopechne. The details of the story are fascinating, and the screenwriters — Allen and Logan — reveal more details about this tragedy in American political history. But you'll have to listen to the entire podcast to get the complete story.