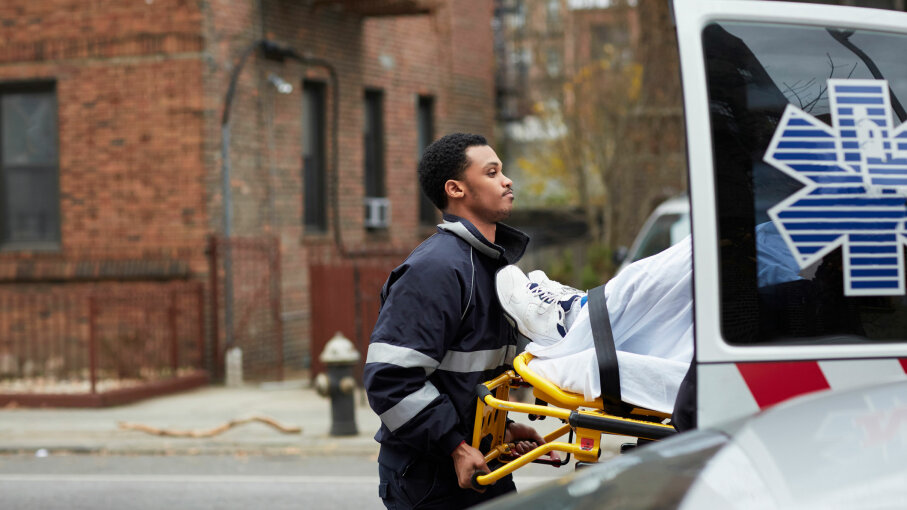 An EMT helps a patient into an ambulance. Emergency medical services were pioneered by the Freedom House Ambulance Service in Pittsburgh in 1967. Granger Wootz/Getty Images

It may seem like a given that when Americans call for an ambulance, a trained paramedic will be on board the truck to begin administering emergency care. But as recently as 50 years ago, this was not the case — ambulances were more like taxis to the nearest hospital. That all changed thanks to an ambulance crew recruited from a poverty-stricken black neighborhood in Pittsburgh, Pennsylvania, that operated between 1967 and 1975. They became the very first ambulance workers in the U.S. trained in advanced life support, setting the bar for generations of emergency medical technicians (EMTs).

If you had a heart attack in 1960s-era Pittsburgh, you had two choices: call the police or a private ambulance company. The police would arrive in a paddy wagon — the same one used to transport criminals, equipped with a canvas stretcher and maybe an oxygen bottle — toss you in the back and roll you to the hospital. Private ambulances were oversized Cadillacs mostly owned by funeral homes (not a good omen), and drivers had no medical training.

For the residents of Pittsburgh's Hill District, an historically black community ravaged by drugs, crime and economic neglect, an emergency call to either the police or a private ambulance company might go unanswered, or else the vehicle would arrive only in time to ship the body to the morgue.

That changed in 1967 when Freedom House Enterprises opened its doors in the Hill District as a community empowerment agency focusing on employment and voting rights. At the very same time, a social reformer named Phil Hallen, disgusted that the Hill District had no reliable ambulance service, dreamed up the idea of training local men — many of whom were labeled as "unemployable" — to provide emergency medical response in the community.

Hallen found the perfect partner in Freedom House, but the project would never have succeeded without Dr. Peter Safar at Pittsburgh's Presbyterian-University Hospital. Dr. Safar, an Austrian-born anesthesiologist, had single-handedly pioneered the practice of CPR and was a vocal advocate for bringing life-saving medical techniques like CPR out of the hospital and into the streets.

With Safar's expertise, and initial funding provided by the city, nonprofit foundations and President Lyndon Johnson's "War on Poverty," the Freedom House Ambulance Service was born on April 15, 1967.

Bringing the ICU to the Patient

Gene Starzenski is a Pittsburgh native, former paramedic and director of a 2010 documentary called "Freedom House: Street Saviors." He says that some of the earliest Freedom House recruits were literally "dragged in off the streets" to fill training classes. The group including Vietnam vets with some medic training, but also struggling drug addicts and even a pimp.

In 1968, George McCary III was 20 years old and living with his grandma in a housing project when she gave him an ultimatum: get a job, go to school or get out. A phone call to a friend tipped him off to a job-training class that might get his grandma off his back. He had no idea that it had anything to do with ambulances or medical care, only that he had to be there at 8 a.m.

What he found that first day at Freedom House was "a rowdy crew, a bunch of knuckleheads," says McCary, but in a short time they realized they were there to learn how to save people's lives. "Anatomy, physiology, CPR, how to take vital signs. We went down to the morgue to watch autopsies. I'd never even been in a funeral home before."

Safar ran the recruits through a year-long training program requiring 160 hours of classroom and hands-on instruction, including six weeks of hospital-based training in the emergency department, operating rooms and the intensive care unit. Safar's vision for modern emergency response wasn't to bring the patient to the ICU, but to bring the ICU to the patient.

John Moon was a young man bouncing around from job to job when he noticed the flashing lights and sirens of the Freedom House ambulance cruising up and down the streets of the Hill District. (The state-of-the art ambulances were personally designed by Safar, also the first in the nation to include defibrillators, IVs and even drugs like Narcan to revive overdoses.)

"I had to find out how I could become part of this," says Moon. "I was turned on by the glamour of it, for lack of a better term."

Moon remembers one particular call when he had to intubate a patient — place a tube into the mouth and down the trachea to assist with breathing — before bringing him to the hospital. The emergency room doctor was floored.

"At that time, it was unheard-of for laypeople to be trained to perform those kind of procedures outside of a hospital," recalls Moon.

A Victim of Its Own Success

Freedom House didn't always get a welcome reception from the medical establishment who saw the ambulance workers as just unskilled drivers. But their own community knew better. The Freedom House EMTs tended to the wounded in the aftermath of the riots that broke out after the assassination of Martin Luther King Jr. in 1968. (This was during their training period.) The service took its first official call on July 15, 1968 — a seizure on a city bus (she survived) — and made more than 5,800 runs in the first year alone.

Pittsburgh looters cart off merchandise from a market on the third day of sporadic disturbances in the city following the assassination of Dr. Martin Luther King.
Bettmann/Getty Images

But ironically, it was the aid these workers gave to a boy who was hit by a bus in a more affluent area that indirectly led to the end of the program. The police called Freedom House to lend assistance (they splinted his leg and started an IV), and word got around that the EMTs had saved the boy's life. Residents from areas outside the Hill District and downtown started pressing for their own emergency medical services (EMS).

The city of Pittsburgh launched its own service in 1975, but it used mostly whites from the surrounding suburbs. It cut off its contract with Freedom House — which meant the end of most of its funding — and told Freedom House workers that they would have to be retrained before joining the city ambulances, despite having years of field experience.

"They quit on me," says McCary, referring to the city's new EMS system. "I came from zero and ended up getting to 99. I loved the work, to be ready for that phone to ring, and to respond to somebody's problem and to give them some kind of comfort. I was there the last day, the very last day when they came to close it down. I went on the last trip. That's how heavy it was."

However, some of the former Freedom House EMTs did end up working for the new city service. John Moon went on to serve 35 years in Pittsburgh's EMS department, rising to assistant chief before retiring in 2009. Another Freedom House alum, Mitchell Brown, became EMS commissioner in Cleveland, Ohio, and then ran the Department of Public Safety in Columbus, Ohio.

The story of Freedom House was largely lost to history before Starzenski produced his documentary, the result of 10 years' research. Since then, Pittsburgh has installed two plaques commemorating the pioneering Freedom House ambulance workers, one in the Hill District and one in Presbyterian-University Hospital, where the ambulances were based.

After years of lobbying, Moon was finally able to convince city officials to place Freedom House medallions on the side of every ambulance in the city of Pittsburgh. But he says that there's still a long way to go before Freedom House gets the credit it deserves for setting the standard of care now followed by every EMT in the world. He wonders how many of those ambulance drivers even know what that Freedom House medallion represents.

Now That's Cool
Forty-five years after the first recruits joined Freedom House in Pittsburgh, the project was reborn in St. Paul, Minnesota, as an effort to diversify the city's EMS workers.