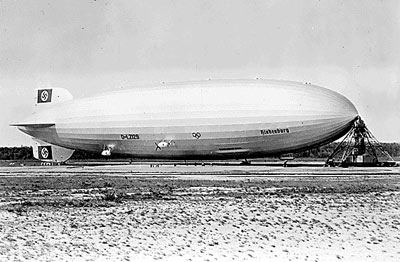 The Hindenburg at the Lakehurst Naval Air Station, New Jersey in 1936, a year prior to the crash
Image courtesy Department of the Navy/Bureau of Aeronautics/U.S. National Archives & Records Administration

If we were to create a list of the greatest disasters of all time, the Hindenburg disaster would be near the top. Like the sinking of the Titanic, the destruction of the Hindenburg is something that still resonates with people many decades after it happened.

It's easy to understand why it resonates. Imagine a gigantic, 12-story tall, three-football-field-long airship detonating in the night sky with 7 million cubic feet of pure hydrogen fueling the explosion, all captured on film. It was a spectacular event that may never be duplicated.

To appreciate the Hindenburg disaster, you have to know a little bit about the time period. The Hindenburg was a massive dirigible built in 1936. There are no dirigibles in widespread use today, but at the time the dirigible was a fairly common way to travel long distances in luxury. This is one reason that the Hindenburg disaster was so interesting -- dirigible travel was something for rich people in the 1930s, in the same way that the Supersonic Concorde was a way for rich people to travel in the 1980s. If you needed to get from Europe to America in the 1930s, the normal way to do it was on a boat. The crossing took about a week at 20 to 30 knots. In a dirigible flying at over twice that speed, you could arrive in a couple of days. Tickets on the Hindenburg were very expensive -- roughly $5,000 to $6,000 in today's dollars. But you were traveling in the ultimate style, with nearly one crew member for every passenger on board.

A dirigible is a rigid airship. Today's blimps, like the Goodyear Blimp, are not rigid. They are basically just big rubber balloons filled with helium. A dirigible actually has a massive aluminum frame inside that gives it its shape. The frame also lets you build accommodations for passengers that look a lot like the accommodations of cruise ship, complete with furnished passenger cabins, dining rooms, and more. Therefore, a dirigible has to be big enough to lift the frame, the frame's covering, all the passenger accommodations and the passengers. That's what made the Hindenburg so big. It was 800 feet long -- about as long as four Goodyear blimps lined up end-to-end. Inside its aluminum frame were 16 giant bags holding hydrogen gas. Altogether there were 7 million cubic feet of hydrogen gas in the Hindenburg -- enough to lift the airship itself, plus over 200,000 pounds of passengers, crew, luggage, food, cargo, et cetera.

By May 1937, the Hindenburg had successfully crossed the Atlantic many times. The safety record of dirigibles flown by the Zeppelin company was perfect. The Hindenburg had flown nearly 200,000 miles and carried thousands of passengers prior to this trip, so no one was expecting anything to go wrong. However, there were a lot of journalists on hand because it was the first flight of the year. The Hindenburg was coming to land into the Lakehurst Naval Air Station in New Jersey after a routine transatlantic flight from Frankfurt, Germany. Thirty-six passengers and 61 crew members were on board and ready to leave. The flight was late due to strong headwinds on the Atlantic, and the weather in New Jersey had delayed the landing even more.

The airship pulled up to its mooring post, let down its ropes to the ground crew, and at that point something went horribly wrong. A fire started near the tail and ignited the rest of the hydrogen in the ship very quickly. The gigantic fire ball was captured on film (both motion picture film and stills), and this is another reason why this disaster was so important. The explosion and aftermath were completely amazing, and people could see it actually happen on film.

The third reason for the resonance of the Hindenburg disaster has to do with the "mystery" that surrounded the explosion. No one knows exactly why the fire started. But there was (and still is) a huge amount of speculation. Here are three theories:

No one will ever really know. It is a strange coincidence that, although many cameras were on hand, none of them captured the start of the fire on film. Eyewitness accounts were conflicting.

There are several things that this disaster has left with us as a society. There is the iconic image of the ship exploding. There is the motion picture film shot that day that captures the disaster. And there is the phrase "Oh, the humanity!", uttered by a radio announcer who was on the scene reporting the event. You may have thought that phrase came from a sportscaster. No, it came from the Hindenburg disaster.

For more information on the Hindenburg and related topics, check out these links: