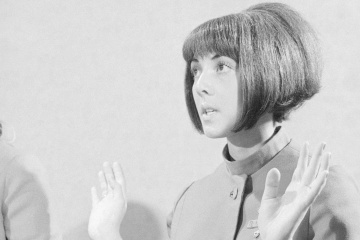 Flight attendant Florence Schaffner, one of the crew members of the hijacked Flight 305, told reporters she initially thought the hijacker was trying to hustle her when he gave her a note stating "I have a bomb."
Bettman/Getty Images

Florence Schaffer read the note. It informed her again of the presence of a bomb and invited her to sit beside him. Schaffner was shaken enough to follow his instructions. Once seated beside him, she asked if Cooper was kidding. He opened his bag enough to show her what looked like a large battery and half a dozen red cylindrical sticks, connected by a series of wires inside the bag. He told her to write down a note to take to the cockpit. It read:

Dan Cooper was a sharp tack. The only threat Cooper made during the entire hijacking came in that ransom demand. He was smart enough to ask Florence Schaffner for the initial note back when she was done reading it. From that point on, Cooper dictated all of his demands for the flight attendants to write down and deliver to the cockpit, which meant other than the ticket duplicate he'd filled out using block letters, the cops would have no handwriting samples of his. Aside from speaking briefly on the cabin to cockpit phones in a couple of instances, the pilot and co-pilot had no interaction with Cooper, and so they would be of little help after the hijacking was over.

What's more, that he'd asked for two pairs of parachutes was a stroke of brilliance. While it revealed his intention to parachute away with the ransom, it also indicated to authorities that he planned on forcing a hostage to jump with him. This ensured the FBI wouldn't give Cooper parachutes that had been tampered with.

Schaffner took the note Cooper had dictated to her to Alice Hancock, who took it to the cockpit. The pilot and co-pilot relayed to air traffic control at SeaTac that a man with a bomb had taken control of the plane and wanted $200,000 in "negotiable American currency" (which is weird). The airport's management called the Seattle PD, which, in turn, called the FBI. They had about an hour to come up with the cash and the parachutes. What would prove to be the only unsolved hijacking in American history was officially underway.