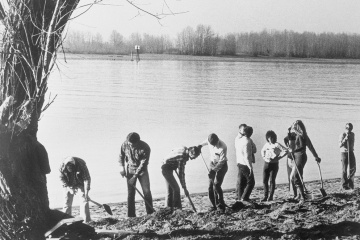 FBI agents dig in the sand on the north shore of the Columbia River where a portion of the D.B. Cooper hijack money was found.
Bettman/Getty Images

A man by the name of L.D. Cooper was also outed by a family member as a possible suspect. His niece came forward in 2011 and said she remembered her uncle showing up to Thanksgiving dinner in 1971 bruised and bleeding, explaining he'd been in a car accident. But he'd seemed inexplicably triumphant.

She suspected another uncle, L.D.'s brother, had helped him in the heist. L.D. and his brothers lived in the area of the hijacking and were handy out of doors. His brother was an engineer at Boeing. He was also known to be a fan of the Dan Cooper comic books. The FBI still kind of likes L.D. for Cooper, even after DNA comparison proved inconclusive. One big missing piece of the puzzle is that, while L.D. was a Korean War veteran, he didn't seem to have had any experience skydiving. This could rule him out, or he could have been the type of person crazy enough to try a heist like that without any prior experience. It would explain the choice of the dummy chute.

Barbara Dayton is the only woman suspected of being D.B. Cooper. Born Robert Dayton, in 1969 Barbara became Oregon's first recipient of gender reassignment surgery. In her former life, she'd been an Army paratrooper and during WWII, in Special Ops in charge of, among other things, assembling guerilla armies from local tribesmen.

Barbara was also a pilot and had befriended a husband and wife private pilot couple, Ron and Pat Forman. At some point, Barb Dayton confessed to being Dan Cooper to the Formans. They came to believe that she had disguised herself as a man to carry out the heist and then blended back into society as a woman after her escape. Dayton later recanted, and the FBI has never listed her as an official suspect, but the Formans still managed to get a book out of it, The Legend of D.B. Cooper: Death by Natural Causes.

Other suspects — and there are lots of them — include a man who died of a cocaine overdose in 1986; a military veteran who killed his mother, wife and three kids a few months before the heist; a skydiving instructor who called the FBI to offer assistance on the case; and a paratrooper with experience with HALO night jumps.