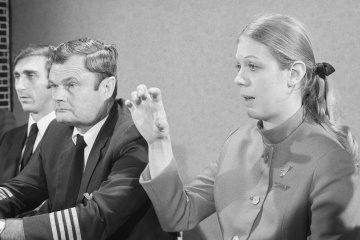 Flight attendant Tina Mucklow (right) described the hijacker as "not nervous." Captain Bill Scott (center) said, "We first knew he was not aboard when we arrived in Reno." First officer Bill Rataczak is at left.
Bettman/Getty Images

While Schaffner was away taking the ransom demands to the cockpit, Cooper had Mucklow sit beside him in her place. To give the cops time to come up with the ransom money, the airliner would have to circle the area around SeaTac Airport.

The other 36 passengers were told that the plane was experiencing a slight mechanical problem and that they would need to circle for an hour or so to burn off some fuel. They had no idea they were aboard a plane that had been hijacked, that's how cool Cooper played it. (One passenger would later claim to have suspected they'd been hijacked, though.) In reality, Flight 305 was the only plane in the sky above Seattle; all other flights had been diverted. One nearby plane tuned into the comm line between 305 and SeaTac control and broadcast it into the cabin for its own passengers to listen in on.

As the plane circled, Cooper chatted calmly with Mucklow about her home state (Minnesota, which Cooper said was nice) and the driving time between SeaTac and a local Air Force base (20 minutes). At one point Cooper offhandedly pointed out that the plane was over what looked like Tacoma, which would later indicate to the feds who interviewed Mucklow that Dan Cooper likely knew the area. In the interim, Cooper sat calmly and quietly and occasionally smoked a cigarette.

Mucklow asked Dan Cooper if he had a grudge against Northwest Orient.

On the ground, authorities scrambled to fulfill Cooper's demands. The money was no problem. Northwest Orient's president Donald Nyrop agreed to pay immediately. The company was insured against such events, and the insurance company would take the brunt of the hit, paying back $180,000 (NWO had a $20,000 deductible on that particular policy).

The downtown branch of a local bank, SeaFirst, was tapped to provide the actual currency on NWO's behalf. They kept money pre-assembled in stacks of varying amounts to make it look like the money had been hastily gathered. In reality, each bill's serial number had been recorded and stored on microfilm. Banks do this in case of armed robberies, but in this case it worked just as well for a skyjacking.

Much more difficult was finding the parachutes.

The recreational skydiving craze was in its infancy and the cops were having a difficult time finding someone who could come up with four chutes. The manager of SeaTac knew a guy who ran Seattle Sky Sports in nearby Issaquah. The owner, Earl Cossey, agreed to help out, and a cop car was dispatched to pick up the chutes.

Cossey called the center to ask an employee to get the chutes ready. In their haste, they grabbed a dummy reserve chute. This kind of chute is used to practice throwing the initial pilot chute into the air. The main part of the chute — the important part — was sewn shut. To prevent just such cases of mistaken use, dummy chutes are marked clearly with an X.