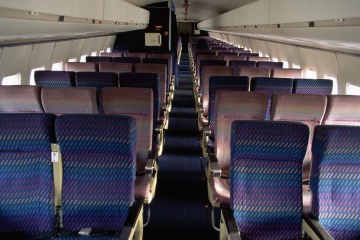 After Tina Mucklow turned away from D.B. Cooper in the 727, no one knowingly saw the hijacker again.
Patrick Bennett/Getty Images

As the refueling process went on, Cooper had a moment of uncharacteristic aggravation.

"It shouldn't take this long," he told Mucklow, and he picked up the cabin-to-cockpit phone to address the pilot directly: "Let's get this show on the road," he ordered.

He gave them specific instructions on just how to fly the plane: Altitude of 10,000 feet, wingflaps at 15 degrees (an angle option only the 727-100 had) and no more than 200 knots (about 190 mph, or 305 kph). At that altitude, the cabin would not be pressurized, which ensured two things. One, it would allow Cooper to open the aft stair door, and two, it would keep him from being sucked right out of the plane when he did.

Cooper had problems. The feds had delivered the cash in a canvas bank bag, not in a knapsack like he'd asked for. That meant he would have to make a handle for the bank bag using the lines from one of the parachutes. He likely never planned to force Mucklow or anyone else to jump with him.

He opened a recreational freefall chute, a pink one, the best of the four he had on hand, and cut the lines and used them to make a handle for the bank bag. He and Mucklow had now moved to the rear of the plane, into the compartment where the aft stairs lowered. It seemed that Cooper believed he would need her help in lowering the stairs, and Mucklow was understandably a little freaked out. She asked for some of the rope from the chute he'd opened so she could lash herself to the interior of the plane in case she was sucked out.

"Never mind," Cooper said and dismisses her. He instructed her to go to the cockpit and not to come any farther back than the curtain that divided first class from coach. When she turned and walked away, it was the last time anyone saw Dan Cooper.

In the cockpit, a light came on at 7:42 p.m., indicating the aft staircase door was open. The crew called the phone in the rear of the plane. Cooper answered, and they asked whether he needed any help. "No," he replied, and hung up. At 8:12, the crew felt the plane oscillate — the movement created by Cooper jumping from the bottom of the aft stairs. Dan Cooper was gone.