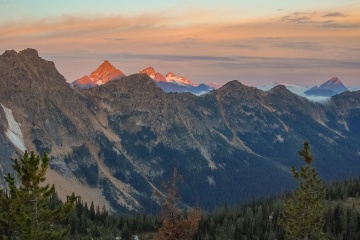 Indeed, Cooper had tremendous odds against him during his jump. The outside temperature that night was about 20 degrees Fahrenheit (-7 degrees Celsius), and at 190 mph (305 kph) and 10,000 feet (3,047 meters), the wind chill would have dropped to about -7 F (-21.7 C). It was also pelting freezing rain, and the clouds would have mostly covered up the faint quarter moon out that night, cutting visibility to a minimum.

Cooper was also not dressed for the occasion. He was wearing business attire: loafers, a suit and an overcoat. The terrain he jumped into was as forbidding as the weather. The Cascade Mountains are nearby, and the land is covered with tall, pointy trees. And he also had to carry both the bank bag and the bag with the bomb, which — contrary to the prediction of the FAA's chief psychiatrist — he had not left behind to detonate.

In fact, after Florence Schaffner was interviewed, the FBI believed the sticks of dynamite she saw were actually road flares (since those are red and dynamite is tan) and that Cooper didn't have a bomb at all. Still, Cooper must have known this would be crucial evidence and decided to take the bag with him in the jump.

He also didn't help his own cause with his extremely poor choice of parachutes. He'd left the two best chutes on the plane, one of which he'd harvested for its rigging to make the bank bag handle. Instead, Cooper opted for a military chute, which had no means of steering once deployed and the ripcord of which was not as easily reached as those of the two recreational chutes he passed over. For his reserve front chute he chose the dummy chute, again clearly marked with an X to indicate the main parachute inside had been sewn shut.

Other theories of Cooper's immediate demise include his surviving the landing but being eaten by bears or Sasquatch or facing some other type of gruesome death before he could make it out of the woods.

Another suggestion is that he was burned by the jet exhaust of the 727's tail engine, which was located just above and in front of Dan Cooper while he stood on the aft staircase before he jumped. However, FBI testing largely discredited this theory. The feds used a 200-pound (90.7-kilogram) sled to simulate Cooper's weight, plus the 21 pounds (9.5 kilograms) the weight of the $200,000 added. They found that at the altitude and speed Flight 305 maintained, the dummy fell straight down, away from the jet's engine. The drop also produced the same oscillation to the plane that the crew had noted at 8:12 p.m.

Despite all of the probabilities stacked against Dan Cooper surviving his jump, there was one key matter that continues to suggest he may have made it: Not a single trace was found of him during that massive manhunt, or for many years after.