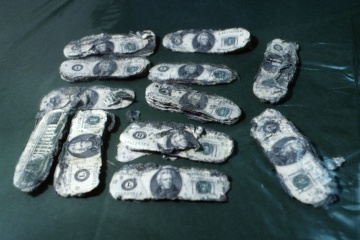 That's not to say Cooper vanished without leaving anything behind. There were the two chutes he left. The FBI found his skinny tie and tie pin on board the 727. They also recovered his Raleigh cigarette butts (he'd smoked eight over the five hours aboard the plane; all eight butts have since been lost) and a hair from the headrest. That was about it.

Cooper thwarted the FBI's most routine evidence, fingerprints. They couldn't find a single print on any of the cigarette butts Cooper had left behind. This was particularly maddening, since such prints could conclusively be shown to be Cooper's. They did find prints around the area where he sat, including on an in-flight magazine, but no known print of Cooper's was found.

Outside of the plane it would be seven years before a trace of the hijacking was found, and even then it was fairly humdrum. In 1978, hunters in the Oregon woods found a plastic instruction placard showing how to lower the aft staircase on a 727-100. While it was definitively shown to be from Flight 305, the placard was found along the plane's flight path, so the clue generated no new leads. Instead, it was remarkable for reigniting interest in the case, enough to inspire a 1981 movie called The Pursuit of D.B. Cooper, starring Treat Williams as Cooper and Robert Duvall as the insurance investigator pursuing him after he successfully gets away.

In February 1980, the first sensational clue turned up. Eight-year-old Brian Ingram was on a camping trip with his family and was smoothing out sand to make a fire pit on Tina (or Tena) Bar along the Columbia River, 5 miles (8 kilometers) downstream from Vancouver, Washington. Ingram turned up three stacks of rotting $20 bills, totaling $5,880. Ingram's parents contacted the police and then the FBI, which asked Ingram's father to read out one of the serial numbers. The stacks turned out to be part of the ransom money given to D.B. Cooper.

After years of analysis, investigators have not conclusively determined how the money could have arrived at the point where Ingram found it. In the state of preservation the money was in after nine years, Agent Himmelsbach and others believe it was exposed to water for only a year or so prior to being found. Tina Bar is more than 20 miles (32 kilometers) away and along another river from the Ariel, Washington, search area along the Lewis (which does flow into the Columbia downstream from Ariel).

A hydrologist consulted by the FBI suggested that either the money ended up there when the Columbia was dredged and the sand taken from it was deposited along Tina Bar in 1974, or when the Columbia River flooded in 1977. Who knows?

After Ingram found the cash, no other clues turned up for 28 years. In 2008, in the area around Amboy, Washington, a few miles southeast of the Ariel search zone, kids noticed a piece of fabric sticking out of some freshly graded ground on their family land. As they pulled, more and more fabric was exposed. It turned out to be a military parachute and one that looked to have been buried for some time. When the kids reached the lines and cords attached to the fabric, they cut them and took their discovery to their father who alerted the cops.

The FBI showed it to Earl Cossey, the owner of the now-defunct skydiving center, to see whether it was one of the ones he'd provided as part of Cooper's ransom. It wasn't. The chute Cooper used was nylon; this one was made of silk. Instead, amid much hubbub in the national media over the possibility that a major clue from the Cooper heist had been discovered, it was identified as a far older parachute, specifically the one that jet pilot Marine Lt. Floyd Walling ditched in the woods after he bailed out of his Corsair fighter one night in December 1945.

While the chute wasn't Cooper's, its discovery did shine a light on the possibility Cooper survived. Walling had. In the same type of weather, Walling had survived his jump and the walk in the woods as he made his way for 8 miles (12.9 kilometers) to a nearby town.