What was the impact of the Age of Enlightenment?

The Effect of the Age of Enlightenment 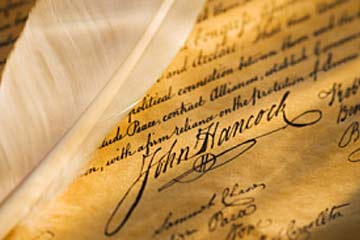 The document that gave birth to a new nation: the Declaration of Independence
Tom Grill/Photographer's Choice/Getty Images

The Age of Enlightenment influenced many legal codes and governmental structures that are still in place today. The idea for the three branch system outlined in the U.S. Constitution, for example, was the brainchild of Charles-Louis de Secondat, baron de La Brède et de Montesquieu. A huge proponent of the Enlightenment, Montesquieu suggested the theory of the separation of powers in order to obtain a political system of checks and balances, promoting order and equality.

Enlightened thinkers believed that when a people consent to be governed, it is with the implicit expectation that their government will act in the name of their common good. Failing that obligation means the people have the right to overthrow their government and install one that will successfully look out for their best interests. In making his case, Jefferson cited actions committed by George III that he felt clearly demonstrated how England had failed the colonies. These included cutting off trade opportunities, imposing taxes without consent, denying people trial by jury, waging war against colonial towns, and other actions Jefferson and the Continental Congress perceived as tyranny.

When it came to the Bill of Rights, James Madison also took a page straight from the Enlightenment playbook when he included such basic personal liberties as the right to freedom of speech, religion and assembly.

France is another country whose revolution was sparked (at least in part) by the fiery passions stirred up during the Age of Enlightenment. In 1789, the French revolted and issued a declaration of rights demanding liberty and equality, among others. In fact, the upheaval of the Age Enlightenment would ripple around the world, and not just in political arenas. Science, culture and the arts were influenced heavily by the ideals and values of the Age of Enlightenment, and other nation's wars for independence from colonial rulers, such as those in South America, were soon to follow.