The Incredible True Story of the Real 'Black Klansman' 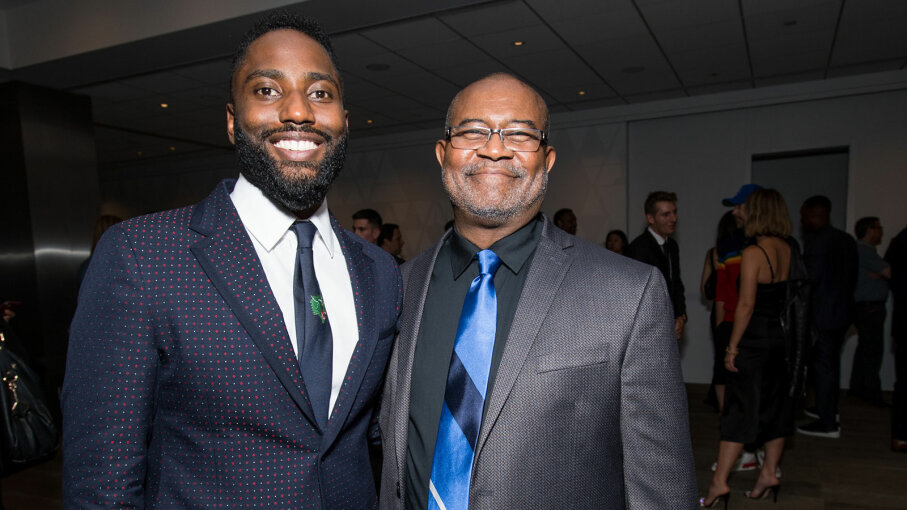 Ron Stallworth (right) and John David Washington (who plays him in the movie 'BlaKkKlansman') attend the after-party for the film's premiere on Aug. 8, 2018, in Beverly Hills. Emma McIntyre/Getty Images

The new Spike Lee film (sorry, "joint") "BlacKkKlansman" starring John David Washington, won the Grand Prix at the 2018 Cannes Film Festival for its gripping and entertaining retelling of a little-known chapter of black history, when a black Colorado Springs police officer, Ron Stallworth, infiltrated the Ku Klux Klan so deeply that he was asked to lead a local chapter.

While the film takes some dramatic license with Stallworth's memoir, many of the most outrageous scenes in "BlacKkKlansman" — including Stallworth's chummy phone conversations with KKK Grand Wizard David Duke — are absolutely true.

The story begins in 1978, when Stallworth was the "Jackie Robinson" of the Colorado Springs Police Department, the first black detective on the force. Flipping through the local newspaper, he found a short classified ad for the KKK with a P.O. box address listed for more information. Since it was part of Stallworth's job as an intelligence officer to keep tabs on potential domestic terrorists, he shot off a note. He signed his real name thinking he'd just get a brochure.

A few weeks later, he got a call at his desk from a local KKK organizer. Asked why he was interested in joining the Klan, Stallworth presented himself as a white man who hated blacks, Jews, Mexicans, Asians — the standard KKK bait. For added realism, he claimed that his sister was dating a black man.

"Every time he put his filthy black hands on her pure white body it made me cringe," Stallworth recalled saying, to the Washington Post. "And I wanted to do something to stop those things from happening."

Pleased as punch to find another white supremacist in Colorado Springs, the Klan organizer suggested the two meet in person. That wasn't going to work, obviously, so Stallworth recruited a white colleague to be his supremacist stand-in. And so began a seven-month undercover investigation in which the two "Stallworths" became card-carrying Klansmen and trusted associates of none other than David Duke.

At one point during Stallworth's investigation into Klan activities in Colorado, he came across a phone number for "The Voice of the Klan" and gave it a ring.

"Damned if David [Duke] didn't pick up the line," Stallworth told the Washington Post. "He laughed and said, 'I'm 'The Voice of the Klan.' He identified himself as the grand wizard, the director."

Stallworth and Duke became fast phone friends, having several long conversations about the many threats against the Aryan race in America. Stallworth buttered up Duke with flattery, but couldn't resist toying with the grand wizard's inflated ego. In an NPR interview Stallworth said he once asked Duke if he wasn't afraid of some black person calling up his organization pretending to be white.

"He said, no, he wasn't fearful of that at all, because he could always tell when he was talking to a black person. And I might add, he never used the term 'black.' He always used the so-called N word," Stallworth said.

Duke replied that it could never happen, because he was able to detect a pure Aryan by the way he pronounced certain words and phrases.

"He said, 'Blacks tend to pronounce the word ARE, he said they pronounce it AR-RA. And he said, 'I could tell by listening to you that you're not black because you do not pronounce that word in that manner,'" remembered Stallworth.

When Duke attended a Klan rally in Colorado Springs, Stallworth was giving the task of guarding him. Duke never realized that Stallworth was the person he'd been talking on the phone with for months. Indeed, Duke didn't find out that Stallworth was a black undercover police officer until 2006, when a reporter wrote about it and columnist Leonard Pitts contacted Duke to fact-check Stallworth's incredible story.

Not a fan of Lee's film, Duke recently tweeted that it was "a big lie. Cops infiltrated a Klan chapter. But, if the film is true by depicting them as violent, why no arrests? no trials? no grand juries?"

While it's true that the investigation didn't lead to any arrests or convictions, the whole point of it was to gather information. Stallworth says that it tipped off police to planned cross burnings, revealed the identity of two Klansmen holding high-level posts within the North American Aerospace Defense Command (NORAD), and disrupted a plot to bomb two gay bars in Denver.

The investigation was shut down in 1979 when, incredibly, the local KKK organizer nominated Stallworth as the new leader of the Colorado Springs chapter. Stallworth's superiors felt the dangerous ruse had gone on long enough.

After his stint as a black Klansman, Stallworth served more than 30 years as a narcotics investigator in Colorado, Wyoming and Utah, becoming an expert in gang culture along the way. He retired in 2006 and self-published his memoir in 2014. He still has his KKK membership card and his "certificate of citizenship" signed by David Duke.

Now That's ... Surprising
Ron Stallworh told Time that David Duke was "a very nice guy in person. A very pleasant conversationalist. The problem with David is he can't go very long without talking about race and the minute he gets on the subject of race, Dr. Jekyll becomes Mr. Hyde and the monster in him is unleashed."