What was the Emancipation Proclamation? 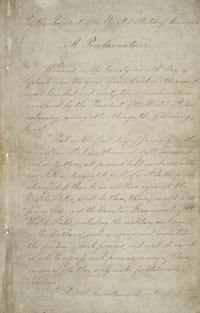 The Emancipation Proclamation, unlike Lincoln's famous Gettysburg Address, is very legal and dry. There's a lack of emotional appeal, which is precisely what Lincoln intended. While Lincoln sometimes gets a bad rap for overstepping his power with this document, the Emancipation Proclamation was his attempt at staying within his legal bounds as president. The Supreme Court was heavy with Southern sympathizers -- it was the same court that made the Dred Scott ruling (see How the Underground Railroad Worked) -- so Lincoln knew that if there was any sort of legal loophole that the court could use to challenge the Proclamation, slavery would be saved.

Lincoln used his authority as the commander in chief to end slavery as a leverage against the rebelling states. This made it a "necessary war measure for suppressing said rebellion" to preserve the Union. Instead of appealing to people's hearts, which were not universally in favor of freeing slaves, Lincoln skirted the Supreme Court's jurisdiction by claiming that slavery's end was a military tactic.

The result, though, was the strangulation of slavery. Although the border states -- Missouri, Delaware, Kentucky and Maryland -- were excluded from the Proclamation, slaves in those states would usually just cross the border to freedom if the state didn't abolish slavery on its own (see sidebar). So why didn't Lincoln include them?

Lincoln may have wanted to completely abolish slavery, but he knew he couldn't accomplish his main objective of preserving the Union if he continued to bleed states and popular support. He had no desire to see the Emancipation Proclamation's defeat, setting back abolition movements and sending the country further into disaster.

But make no mistake: Lincoln knew what he was doing. He told newspaper reporter James Scovel that the Proclamation would be "my greatest and most enduring contribution to the history of the war" [source: Guelzo].

­The final document was more than 700 words long, and some of its importance can be diluted by the legal jargon. So let's take a look at the Emancipation Proclamation section by section as it was issued on Jan. 1, 1863, to discover what Lincoln was addressing in each part, and why some of it was so controversial.

What happened to slavery in the four border states excluded from the Emancipation Proclamation? Maryland and Missouri abolished it in revised state constitutions in October 1864 and January 1865, respectively. Delaware and Kentucky continued to uphold slavery even after Lee's surrender. In fact, Delaware, which by many estimates had fewer than 2,000 slaves, refused to ratify the 13th Amendment. Only in December 1865, when the amendment went into effect, was slavery abolished in the two remaining slave states.