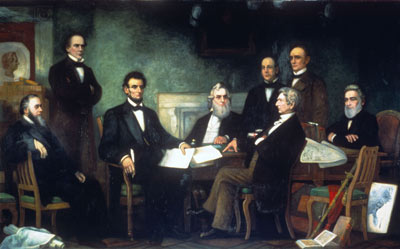 Abraham Lincoln at the signing of the Emancipation Proclamation
MPI/Getty Images
"W­hereas, on the 22nd day of September, in the year of our Lord 1862, a proclamation was issued by the President of the United States, containing, among other things, the following, to wit:"

The final Emancipation Proclamation went into effect on Jan. 1, 1863, but there were a couple of earlier drafts.

July 22, 1862: Lincoln presented his first draft of the Proclamation to his Cabinet. It maintained Lincoln's position that slavery should be abolished gradually and that slave owners should be compensated.

The Cabinet's reaction? While the feeling was that emancipation was desirable in theory, the political and social consequences concerned them. Postmaster General Montgomery Blair, for instance, predicted that the Proclamation would be unpopular and cost the Republican Party in that year's congressional elections. Treasury Secretary Salmon P. Chase feared that the Proclamation exceeded Lincoln's authority. Secretary of State William Seward worried that it would appear to Europe and the rest of the world that the Union was losing the war (which it was, at that point), and that the Proclamation would be perceived as a desperate attempt of a failing government -- "as the last measure of an exhausted government, a cry for help … our last shriek, on the retreat" [source: McPherson]. He advised Lincoln to wait until a major Union victory, which came in September 1862 at the Battle of Antietam.

Sept. 22, 1862: Lincoln issues the preliminary Emancipation Proclamation. Why a preliminary version? Because by saying that the decree would not take effect until Jan. 1, 1863, Lincoln was giving the rebels one last chance to hold on to their slaves -- as long as they agreed to rejoin the Union.

Jan. 1, 1863: The final Emancipation Proclamation was enacted. By Jan. 1, no states had willingly returned (although a few plantation owners did try to sign individual loyalty oaths), but Union forces had captured parts of some rebel states, so Lincoln excluded them from the Proclamation (we'll see what exactly was excluded a little later).